What does the future of work mean for health, safety and wellbeing?

To quote the great wisdom of our age, Dolly Parton, there was a time when work was simply just “nine to five”.

But the advent of automation, zero-hours contracts and the “gig economy” has meant for many of us, work is now much more “24/7” with all the added challenges and pressures that come with it.

And with 11 million jobs predicted to be lost in the UK over the next 20 years through automation alone, the future of work and its changing nature also raises important questions in terms health, safety and wellbeing.

After all, if the workforce of the future is more mobile and less office-based, how can employers maintain their duty of care for their staff? 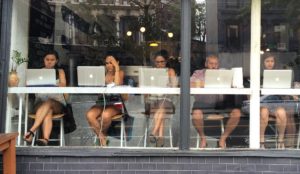 A recent report by the British Safety Council, Future Risk, looks at this issue and what the shifting landscape of work could mean both for employees and employers.

In particular, it notes how the relationship between employers and their workforce will change as we all move away from standard practices, hours and locations.

It also calls on employers to introduce new training and wellbeing programmes to help staff gain skills that will help them to cope in new environments, with an emphasis on teaching workers how to look after themselves.

Change since Health and Safety at Work Act

Speaking to SHPonline, the British Safety Council’s policy, standards and communications director, Louise Ward says the world of work has changed an “awful lot” since the 1974 Health and Safety at Work Act.
“The way we interact with work is changing and I don’t necessarily think that’s a bad thing,” she explains.

“A more informal working culture opens up the workplace to a number of people, who might not have been able to access it before.

“Being able to work flexibly or from home, or have a ‘gig economy’ job, means that people who might not have been able to work are now able to access the world of work.

“I think more traditional jobs will become less common as time goes on, but I don’t think that necessarily means huge numbers of people out of work,” she adds. “Rather than having people on a production, the production line will be automated, but the people will still have a role in programming and supervising the automated line.”

Shift needed in health and safety

But she adds “traditional approaches” to health and safety are not going to be as effective anymore.

“If you go back to the beginning of the Health and Safety At Work Act, workplaces were controlled environments,” she explains.

“Most people came through the door, worked in a very structured way and they went home at the end of the day. Now people can work from anywhere – coffee shops, home and trains. Because the workplace is less defined, I think the controlled approach has got to be different.

“Rather than building a compliance-led framework, which is all about control, I think what they need to do is shift their focus to processes and support systems, and enabling people to take a much more active role in their own health and safety.

“There’s a bigger role now for workers to be thinking about their own health and safety and accessing systems. It’s not possible for the employer to control how you are sitting at your workspace if you are working in Starbucks, but if the worker has been trained and empowered, they can set themselves up comfortably if they are going to spend an hour working in a coffee shop.

“You only have to sit with a laptop on your lap for an hour or so, and your neck is stiff and your shoulders hurt, so it’s really important that people are comfortable and understand how to make themselves comfortable,” adds Ms Ward.

“Back in the 1970s, we were all really focused on accidents and fatalities, because they were the most immediate things. Over the years, work has changed and we have become much better at managing health and safety,’ she says.

Increasing focus on health and wellbeing

“Now fewer people suffer life-changing injuries or are killed at work. As those figures have gone down, we have become more focused on other things that have the capacity to affect workers, like health and wellbeing, the aging workforce.

The things we need to think about are shifting and it’s about applying the learning we have from everything we have achieved in traditional safety and transferring that across to think about newer issues and diverse workplaces.

It’s about thinking a little bit strategically and the future, rather than the here and now and what you can control.”

One of the big issues in the modern workplace is mental health. For many people, there has been a discernible link between the growth of insecure working practices and a rise in people suffering with mental health issues.

“That security of knowing you have a pay cheque coming at the end of the month is a really important part of your mental wellbeing,” adds Ms Ward.

“There was a Shelter report that was published in August 2016, which said one in three working families is only one pay cheque away from losing their home. If you know you are living on that basis and not confident you have a fixed amount of money coming in at the end of the month must be a real worry for people.”

Opening up about mental health

The Future Risk report also recommends schools and training bodies instil in pupils at an early age the importance of wellbeing.

“If you have a streaming cold or you have broken your ankle, people can see that and offer help and support,” says Ms Ward. “But if you are worried about your financial situation or if a loved one is ill, people don’t know.

“Years ago people would not talk about cancer, because there was a stigma associated and we have done an awful lot to dispel that. I think we have to do the same with mental health. It’s ok not to be ok sometimes. We’re not all ok all the time, but we need people to be able to talk about it. A lot of the time, a problem shared is a problem halved. Just knowing you are not on your own can make a big difference to people. But if you do need some more support, it will help us get it to the people who need it immediately.”

“I had a group of level crossing managers in my previous job at Network Rail, who were spread between Euston and Carlisle. Everyone worked on their own, looking after their own crossings. They really needed to be bouncing ideas around with each other and feel connected. They set up a WhatsApp group and that was tremendously effective.

“As time moves on, the pace of change seems to get quicker and quicker. It’s good in a number of ways, but in our knowledge-driven economy we need to be continually appraising and adapting our approach in order to remain successful.

“I think a lot of people are thinking about the future, particularly in the way people are working and how technology is interacting in the workplace. That’s where organisations like BSE have a role, helping people to digest the information and think about it at a level, which is appropriate for their business.”

Get your free ticket today
What does the future of work mean for health, safety and wellbeing? To quote the great wisdom of our age, Dolly Parton, there was a time when work was simply just “nine
Safety & Health Practitioner
SHP - Health and Safety News, Legislation, PPE, CPD and Resources

What are the risks of not responding to a critical alarm in time?

Head and eye protection become one

Celebrating the success of Women in Health and Safety