Cause of accident: ground spoiler controls 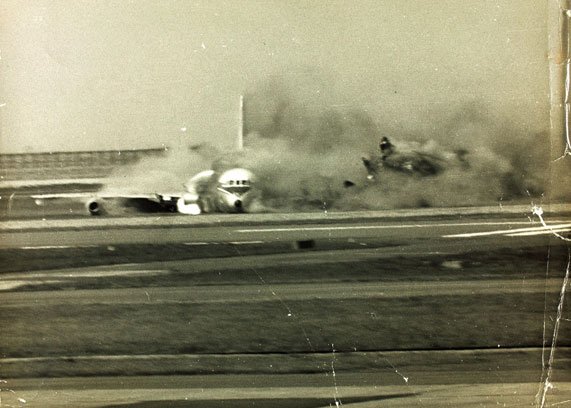 On larger aircraft, there are spoilers — sections of the wing’s top surface that hinge up to disrupt the airflow over the wing.  On some aircraft these are primary flight controls, so don’t get upset if you see them operating in flight from your Airbus window.  However, on the DC8 they were purely for ground use and they would be fully deployed to dump the lift on landing as the weight was transferred to the undercarriage.

On the DC8 they could be operated either manually or automatically, but the lever to deploy them manually was the same lever that was used to arm their automatic mode.  You lifted it to arm the automatic deployment and slid it to deploy them manually. On the approach, the pilot would lift the lever to arm them.  If he slid the same lever, he would dump the lift and, at low level, this means that the aircraft crashes.  So let’s recap: Lift the lever to arm the spoilers on every approach; slide the lever to crash the aircraft.  This was not hypothetical; it actually happened in Toronto on 5 July 1970, when the spoilers were deployed at 60 ft. 109 people were killed.

The other factor was the different practices; some pilots armed the spoilers, some deployed them manually. And when you mix the two types of pilot, as occurred here, with a lever with major ergonomic problems, disasters happen.