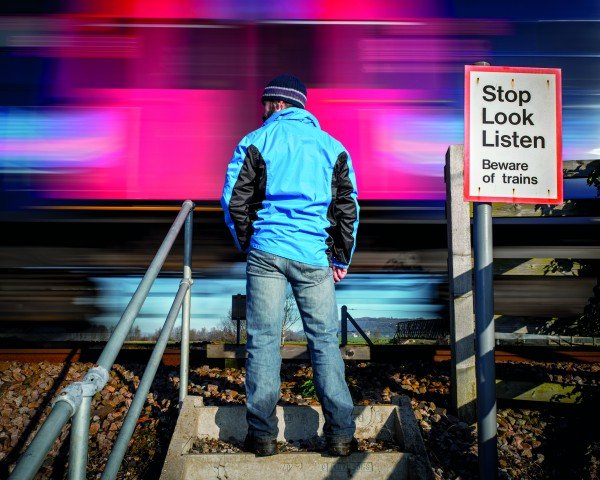 The rural environment poses very unique health and safety risks to local communities. Alan Plom looks at rural railway crossings, which, over the past decade, have been the scene of many avoidable fatalities.

Level crossings are considered to be the biggest risk to people on the railway, yet most readers will have seen shocking films of people putting themselves (and others) at risk by attempting to cross railway tracks on level crossings in front of approaching trains – either on foot, riding motorbikes or bicycles, or in vehicles, and often ignoring red warning lights, descending barriers or even signallers’ instructions.

Tragically, in the past 10 years, 95 people (excluding suicides) haven’t made it ‘safely’ across to the other side of the tracks. Twenty-three were road vehicle users and 72 pedestrians. But even if a collision and injury is avoided, it can hardly be called getting across ‘safely’ can it? There is still the mental anguish and long-term impact on train drivers and witnesses.

There are nearly 6,000 level crossings on the rail network, but this article focuses on the 2,281 (about 38 per cent), which are ‘user-worked’ private crossings (UWCs) and rarely make the headlines. These are generally ‘passive’ crossings, i.e. without automatic barriers or warning lights to alert users to oncoming trains, so create significant additional risk to individuals using them, as well as to railway staff and passengers. They tend to be comparatively high-risk relative to the volume of traffic passing over them, usually being found in rural areas enabling restricted access to farms and other businesses, houses and hamlets.

The majority of UWCs are private rights of way and the responsibility of an ‘authorised user’, who is given the right to cross the railway. While they are mostly used by farmers to access their fields, many UWCs are often used by other businesses, e.g. for deliveries, access to utilities, watercourses, recreational sites, etc.

In addition, there are over 2,100 ‘footpath’ or ‘bridleway’ crossings that are not designed for vehicles but might also be used by people at work.

If you, any of your staff, contractors or clients use rail crossings other than those on public roads, then you need to be aware that private crossings are not usually protected by train signals and the user is at risk until they are clear of the crossing.

At most UWCs therefore, vehicle drivers, horse riders, etc, are required to contact the railway signaller before crossing (and after, if requested). However, some UWCs are ‘sighting-only’, where the user has to look out (and listen) for approaching trains when crossing on foot or in a vehicle.

The added danger is that when such crossings are only used occasionally or unexpectedly, e.g. by contractors or others to access land or buildings ‘on the other side of the tracks’, risk assessments might not cover such unusual activity.

Fortunately, there has not been a train passenger fatality at a private crossing since the 1970s, although there have been some serious injuries. However, the industry is concerned that as there is little realistic chance of stopping a train if a vehicle gets stuck on a crossing or crosses as a train is approaching, and because the train will be usually be travelling at ‘line-speed’, there is the potential for derailment and a major incident.

The most serious incident on a rural UWC in recent years involved a minibus carrying vegetable pickers to a field when it was hit by a high-speed train in 2003.

Three of the workers died and three others were seriously injured. Other incidents have involved workers from various industries, including a double fatality involving utility (electricity distribution) workers, killed when their vehicle was struck by a train in 2004.

Collisions continue to occur and another potential major incident made the headlines in May this year, when a Leeds to York train collided with a tractor on a level crossing. The tractor was split in half and one of its wheels became wedged under the train. Luckily, the train didn’t derail.

If the statistics and incidents quoted don’t worry you enough, users of private crossings should also be concerned by the following information, taken from the Rail Safety and Standards Board (RSSB) annual safety and performance report for 2013-14:

* 14 per cent of all level crossing deaths occur at UWCs – with or without telephones.

* 53 per cent of all near misses between trains and road (land-based) vehicles occur at UWCs.

* 34 per cent of all collisions are between trains and road vehicles.

* There are on average two deaths per year of users crossing on foot or in vehicles at UWCs.

* Drivers of vehicles involved in collisions with trains have been prosecuted by British Transport Police, and some have received prison sentences.

Initiatives to reduce the risk at level crossings 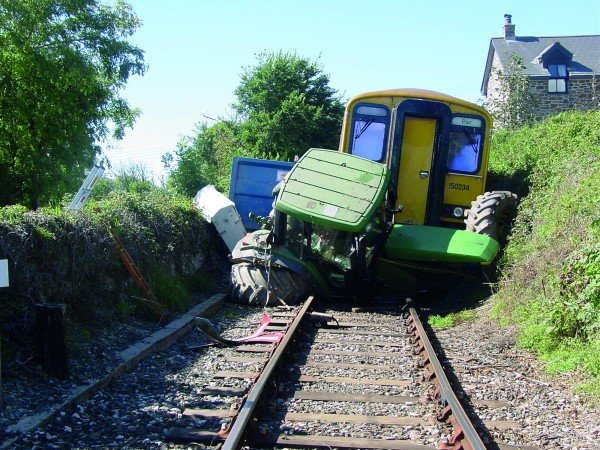 A collision between a train and a tractor occurred at Coswarth, Cornwall at a user worked crossing on 31 August 2004. Photo credit: Network Rail

Network Rail is investing £100m in a Level Crossing Risk Reduction Programme, which runs until 2019. Since 2010, Network Rail has:

* Closed or diverted over 930 level crossings (with the agreement of the ‘Authorised User’). However, these were mostly the least used or their closure caused least inconvenience and future closures will be more difficult and costly.

* Replaced some footpath crossings with footbridges, or installed warning lights as an additional safety measure at some others.

* Developed and installed power-operated gate openers (POGOs) at some UWCs. These devices avoid the need for users to leave their vehicles and make the highest risk multiple traverses over a crossing on foot. Training for users and maintenance staff is being provided.

* Installed spoken warnings at 117 crossings, which announce “another train is coming” after one train has passed through.

Network Rail and the RSSB are also working to raise awareness of the dangers of level crossings and improve safety among the most at-risk user groups such as dog walkers, cyclists, commercial drivers young people and now, farmers, with a series of targeted campaigns with the theme “take care on level crossings, or you’re on dangerous ground”.

As highlighted previously, UWCs on farms create a significant proportion of the risk to rail users as well as crossing users. In the last five years, four trains have hit farm vehicles, and there have also been over 100 near-miss incidents at crossings on farmland alone. Last year these jumped from 15 to 22, a reversal on previous years of steady decline.

One factor is that farm machinery is getting bigger, wider, higher, heavier and longer, leading to poor visibility along the track, crossings taking longer and manoeuvring more difficult. The risk is exacerbated by increased working around the clock, during harvest and cultivating.

As a result, Network Rail has teamed up with the National Farmers’ Union (NFU) in a new campaign to remind farmers of the critical safety rules and provide them with helpful materials to guide their workforce and regular visitors. These new resources include an instructional booklet and posters designed to be understood by the many casual workers that work on farms, particularly in harvest season and whatever their nationality or first language.

The campaign reminds farm-crossing users of the importance of:

* Using the telephones provided at level crossings to check that it is safe to cross and, if asked, to ring back to let the signaller know when they are clear of the line.

* Remembering to close level crossings gates after use, so others don’t mistakenly think it is safe to cross.

* Clearing the crossing as quickly as possible, particularly when moving livestock across them.

Network Rail’s 100 newly-appointed level crossing managers will be working closely with their local NFU branches to deliver a programme of education for farmers and their workers. This will be carried out over the coming months, targeting those working during this harvest season and next year’s.

NFU vice-president and chair of the Farm Safety Partnership Guy Smith said: “We are delighted to have the opportunity to work alongside Network Rail to improve safety at level crossings. We appreciate farmers are often under pressure during busy periods, but would urge them to be extra vigilant, ensuring that all safety procedures are followed strictly and all workers on their farms are well informed.

“With over 100 near miss incidents at level crossings on farmland since 2010 we recognise the importance of such a campaign and hope that our members will be better informed as a result. We hope that working with Network Rail level crossing managers at a local level will not only improve the safety of our members and the public but also help improve communication and understanding as a whole with our membership.” 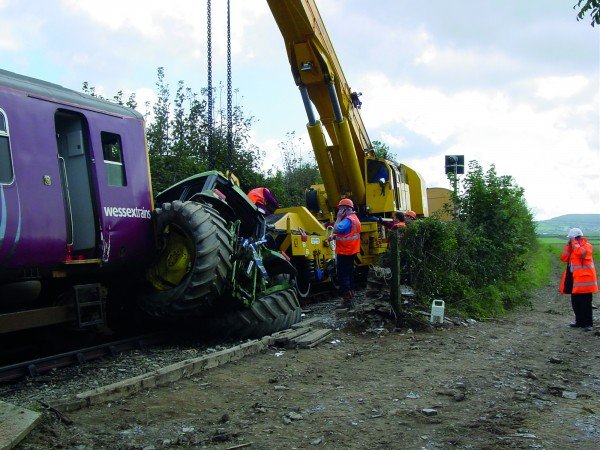 Information on the farmers campaign, including film of a near-miss involving a tractor and links to relevant guidance on Network Rail’s website have been posted by the NFU on its website. [1]

ORR and Network Rail are keen to find opportunities to educate UWC users and the IOSH Rural Industries Group (RIG) has been playing its part in helping to raise awareness and encourage good practice. RIG has organised networking events for the agriculture, forestry and amenity sectors, and has supported ORR and Network Rail at a series of UWC awareness days, covering transport and electrical safety over recent years.

These events provide information and practical instruction to professionals, employers, managers, employees and contractors. They started in 2008 and originally used a ‘live’ rail crossing near to the Forestry Commission’s visitor’s centre at Birches Valley, Cannock Chase, Staffs.

However, in 2010, a full-scale mock rail crossing – complete with track, manually operated ‘user-worked’ gates and the relevant ‘infrastructure’ (telephone, alternative signs for different types of crossing, etc) – was built there by Network Rail for demonstrations at the APF (Forestry) Show. This was used by ORR in collaboration with the Forestry Commission, electricity distributors, HSE and training organisations.

The Forestry Commission has kindly allowed this equipment and site to be retained as a ‘legacy’ training facility and between two and seven (free) awareness days have been run each year since 2008 at Cannock (and elsewhere).

Sessions include demonstrations on how risks at UWCs can be properly managed, within the context of transport safety. The facility includes a mock 11kV overhead power line so electrical risks, including avoiding contact with overhead and underground power cables, are usually covered too.

As such, these awareness days are relevant to almost any industry, and have so far attracted around 600 delegates from a wide range of sectors, including utilities, waste and recycling; environment, canals and rivers, etc; local authorities, footpaths officers, emergency services; the leisure, sports and voluntary sector; construction and maintenance; transport, delivery of goods, mail and parcels, as well as rural industries and companies and contractors working on railways.

The author has produced a follow up article ‘Rural Railway Safety Focus’, which goes live on SHP Online on 2 October (see pink box below).