From next year, it could become illegal for anyone to pick up and use their mobile phone while driving, putting an end a loophole that can allow drivers to escape punishment for using a hand-held phone to take a photo or play a game. 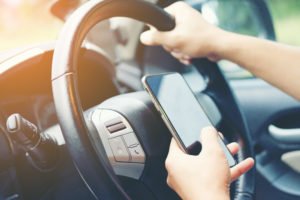 A consultation has been launched, proposing expanding the use mobile phones while driving rules to include the use of stored, non-connected (‘standalone mode’ or ‘flight mode’) functions. Presently, it is an office to make phone calls and send text messages whilst driving.

The consultation proposes to:

The changes, if implemented, will need to be reflected in The Highway Code, and the consultation document includes the suggested revised wording.

The consultation document is set out as follows:

Download Now
Road safety: Drivers to be banned from handling mobile phones From next year, it could become illegal for anyone to pick up and use their mobile phone while driving, putting an end a loophole that can allow drivers to escape punishment for using a hand-held phone to take a photo or play a game.
Barbour EHS
SHP - Health and Safety News, Legislation, PPE, CPD and Resources

Why has it taken so long to make this change? Because politicians simply have no awareness of risk and care little about the health, safety and wellbeing of citizens.

We all know in reality its illegal to phone whilst at the wheel. This is where Churchill’s quote “If you have 10,000 regulations you lose all respect for the law” comes to mind. People know it’s wrong, don’t legislate for any tiny thing just for the sake of wasting paper. Anyone presenting a danger to other road users can have the book thrown at them already.

but if they dont then lawers get them off the hook, this is closing a loophole

With the advancement of technology since the introduction of the law back in 2003 its a loop hole that defiantly needs closing, yes we all know its wrong but that does not stop the countless number of people I encounter in a day either holding their phone to their ear or secretively using their phones on their laps whilst driving.
Just ban and fine everyone that is found to breach these regulations no exceptions, too many people have lost their lives and loved ones already.

If you use your Phone screen they want to fine and put points on your license. However modern cars have for a better term a tablet fitted at manufacture and this isn’t illegal to use and won’t be under these rules either. Question:- whats the difference between using your phone screen to control the music etc or the tablet. Really nothing but as it fitted in the car by the manufacturer you can do everything via the tablet and thats fine by the law. But if you own a older car and USB link or Bluetooth to the radio to… Read more »

There is no traffic police around to manage this endemic behaviour of using phones while driving, we won’t see any government campaign to raise awareness. I challenge IOSH etc to speak with the government of the day to get a strategy on changing behaviour on phone use while driving. My family is victims to an accident that permanently brain damaged my father, it took him 9 years to die from his brain trauma, I did sign the consultation on stricter penalties for driving without due care and attention due to the law back in 2008 not being hard enough on… Read more »

have a look at the australian traffic cameras, they can detect when people are using phones whilst driving. These will be in the UK soon, police wont be needed then to police it