A bus company that ignored warnings about a driver who crashed into a supermarket, killing two people, has been fined £2.3m. 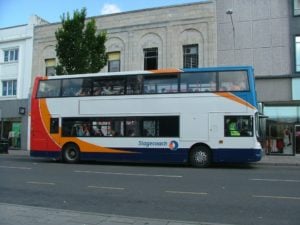 Chander, from Leamington Spa, was found to have been driving dangerously at a fact finding trial in September. He could not be found guilty as he was deemed mentally unfit to stand trial.

The bus company, which is part of the Stagecoach group, was sentenced alongside Chander, who was diagnosed with dementia after the crash, at a two-day hearing at Birmingham Crown Court.

Judge Paul Farrer said “the failings of the company were a significant cause” of the crash. Warnings about Chander were “not enforced, and almost immediately ignored,” he said.

Chander was handed a two-year supervision order, meaning he will be monitored by a doctor.

Seven-year-old Rowan Fitzgerald was riding on the top deck and died of a head injury when the bus crashed on Trinity Street on 3 October 2015. Pedestrian Dora Hancox, 76, died after being struck by the bus and a falling lamppost.

Chander had mistaken the accelerator for the brake.

Phil Medlicott, managing director of Midland Red (South) Ltd said the company is “deeply sorry” and “bears the weight of our responsibility for this tragedy.”

“We deeply regret the opportunities that were missed to act decisively on emerging warning signs,” he said.

The bus company admitted failings including allowing Chander to work in excess of 70-hours a week and allowing him to continue working despite warnings about his driving.

A trial of facts in September found Chander had been warned about his “erratic” driving by the company after four crashes in three years.

Chander’s barrister Robert Smith told the court the former Leamington Spa mayor was “traumatised” by the crash and now requires full-time care. An expert told the court he may have been suffering from undiagnosed dementia at the time of the crash.

The company has “made several key changes”, Mr Medlicott said, including stronger controls on working hours and more medical testing for drivers.

“We cannot turn back the clock in this case, but we have done everything possible to learn lessons,” he claimed.

Stagecoach bus crash driver was reading at the wheel

The guiding mind of Stagecoach should all be fired. It’s a disgrace. At the very least, health surveillance should be mandatory for those who are of concern, and particularly so when they reach 60-70. 70 hour weeks? What a joke!! Not even a 40 year old can keep that up frequently without an impact on performance. Two people dead for nothing. I hope the £2.3m fine sticks. Personally I think it should have been more, as it’s clear they haven’t got a scooby, but it is at least, a sizeable sum.

It was people or a person who allowed this to happen. Companies are as good as their staff . When will courts delegate responsible people by naming individuals who let us down. These are not accidents someone’s failed to do something.

The “fine” – far too small!! 2 lives lost, company aware of the problems, carried on working, would it have made a difference if there were more lives lost, 4 / 5 or 6 – almost worth the risk.