How virtual reality is keeping us safe

Until the last few years, the words ‘virtual reality’ used bring to mind computer games and amusement park rides. It was a technology commonly associated with novelty use, but VR is now being introduced to a range of new applications – and it’s making waves in everything from medicine to health and safety.

Even going back five years, the idea of using a VR headset to identify workplace safety hazards would have felt worlds apart from using the same technology to go into battle on a console game, but that’s the level that virtual reality has now reached. From industrial infrastructure to the Royal Mail, here are a few ways that a new type of immersive digital experience is helping to improve real-life safety. 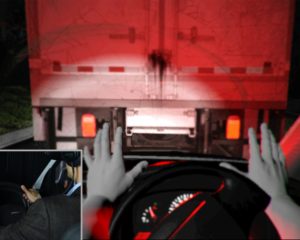 Infrastructure support organisation Amey identified some time ago that driver fatigue in maintenance workers was a key cause of employee accidents and injuries, both during working hours and while commuting.

Shift workers are six times more likely to be in a fatigue-related crash than other types of employee, and while that’s dangerous enough on a journey to or from work, it’s particularly hazardous while operating large vehicles and heavy machinery on the job.

To try and tackle the issue, Amey commenced an ambitious project with a company who make immersive VR and AR solutions for theme parks, working hand-in-hand with one of their existing suppliers. Collectively, they created a virtual reality driving simulator which helps users to understand the consequences of driving while fatigued.

Research has found that people who have been involved in a near miss, or who have actually experienced an ‘incident’, have much better safety behaviours than people who have never been hurt while doing something in an unsafe way. Amey’s VR training provides different hazardous events for the user to experience, with the aim of stimulating safer behaviours in and out of the workplace.

When undertaking training for things like IOSH and NEBOSH qualifications, virtual reality once again gives users the chance to immerse themselves in a simulated environment which reflects potentially dangerous real world scenarios.

The British Safety Council has added a VR element to almost all of its health and safety training courses, to enable students to make risk assessments based on virtual “in-situ” observations.

The British Safety Council’s Head of Digital Learning, James Mansbridge said that: “VR provides a safe environment in which to learn, where making mistakes is not only okay, but enhances the overall learning experience.”

Augmented reality or AR is also coming into play, allowing users to interact with things like a virtual pedestal drill overlaid onto their physical environment. By using virtual equipment, students can learn correct operation without the risk of injury if a mistake is made.

When situations are impossible to safely recreate, or not feasible to physically run through with all those who need to learn about them, VR and AR are now used to help people pin down safety best practices in a memorable way.

Dozens of postal workers are attacked by dogs each week in the UK, and this leads to permanent or disabling injuries more often than most of us would like to think. To try and defend Royal Mail employees against the risks posed to them while undertaking their rounds, the organisation has been piloting an interactive VR experience to change people’s perceptions on dog safety and to better educate staff on how to stay safe.

Their training is accessible either via VR headset or as a 360-degree video that works on laptops and PCs, and it creates scenarios whereby users must spot the key indicators that a dog may be present, before working to avoid coming into harm’s way.

Royal Mail Dog Awareness week has helped to cut down the annual number of animal attacks on postal workers by 8%, but there’s still plenty of work to be done. James Barton, Online Learning Manager for Royal Mail, says that “Virtual reality allows people to explore a realistic situation and make mistakes in a safe environment. I value the opportunity offered by VR to immerse people and remove outside distractions or peer pressure while they learn.”

Each year, British postal workers lose fingers and thumbs, suffer bites to the calves, buttocks and testicles and in some cases, experience life-changing muscle damage that can require mental health support and physiotherapy to move on from. Royal Mail hopes that VR training can help to mitigate some of these issues, and keep the UK’s postal workers safer than ever.

Why VR is so effective? 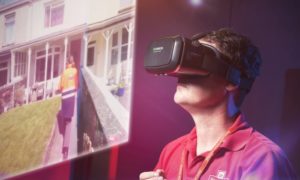 Unlike simply looking at photos or videos, immersive virtual reality is highly engaging. Research has shown that VR reduces the time it takes to learn new information, decreases the amount of errors that students make and also helps people to retain their knowledge longer than traditional training methods.

In medicine, students using VR to learn gallbladder dissection are 29% faster and six times less likely to make an error than their peers. When learning the Heimlich manoeuvre and basic wound care, knowledge retention is around 80% a year after virtual reality-based training compared with only 20% after traditional training. Studies of the efficiency of VR training often note that virtual experiences are stored in more detail in our memories than video, which is registered and stored in a similar way to looking at a still image.

In practical terms, VR training is easy to repeat, it’s scalable and it provides isolation from any nearby distractions. For health and safety practices, the ability to train people about hazards and hazardous environments without putting anyone at risk is clearly a huge selling point. The question now is less about whether or not to use VR more widely in the field of health and safety, but about when and how to do so.

Listen to the webinar for free
How virtual reality is keeping us safe From industrial infrastructure to the Royal Mail, here are a few ways that a new type of immersive digital experience is helping to improve real-life safety. With examples from British Safety Council, Amey and Royal Mail.
Safety & Health Practitioner
SHP - Health and Safety News, Legislation, PPE, CPD and Resources

I wondered if you  could help me, I understand you
interviewed James Burton from Royal Mail concerns using VR technology. I hoped
you have some contact information for him or his colleagues? Only we at HMCTS
are interested in looking at this kind of technology and would like to find out
more about Royal Mails experience of the technology. If you have any
information you are happy to disclose I would really appreciate it. Thanks in
advance

Hi Diane, i’m afraid this was a fair while ago and before my time on SHP, so I don’t have any contact details i’m afraid. Maybe try LinkedIn? Ian, SHP Editor.

I don’t know if you had any joy, but his name is actually James Barton, and he’s the Online Learning Manager for Royal Mail. His LinkedIn is here. Sarah