Jamie Hailstone is a freelance journalist and author, who has also contributed to numerous national business titles including Utility Week, the Municipal Journal, Environment Journal and consumer titles such as Classic Rock.
September 20, 2018

Virtual Reality at Lendlease: Stepping inside a virtual world to make the real one safer

Imagine being able to walk around a new estate that has not yet been built and spot any health and safety issues before they become too difficult or expensive to fix.

The use of virtual reality (VR) headsets has already become widespread in architecture and design, particularly with the advent of increasingly-realistic 3D graphics, but developers Lendlease have gone one step further with their Elephant Park project in Southwark by building a 360-degree virtual reality room.

The VRoom allows people to walk, drive or even fly around detailed 3D models for the massive central London regeneration project.

As well as helping to give residents and other stakeholders a chance to see and give their opinions on the plans, it means that teams of engineers, designers and safety experts can work together and examine every aspect of the project in detail.

“VR headsets certainly have a value, but VRoom enables the entire project team to visualise the design together in a 360 space,” says Elephant Park’s Health and Safety Lead, Ian Cunningham.

“Using a headset is a singular experience, using VRoom is a collective experience that supports collaboration and fosters enhanced design outcomes that add value and mitigate risk.” 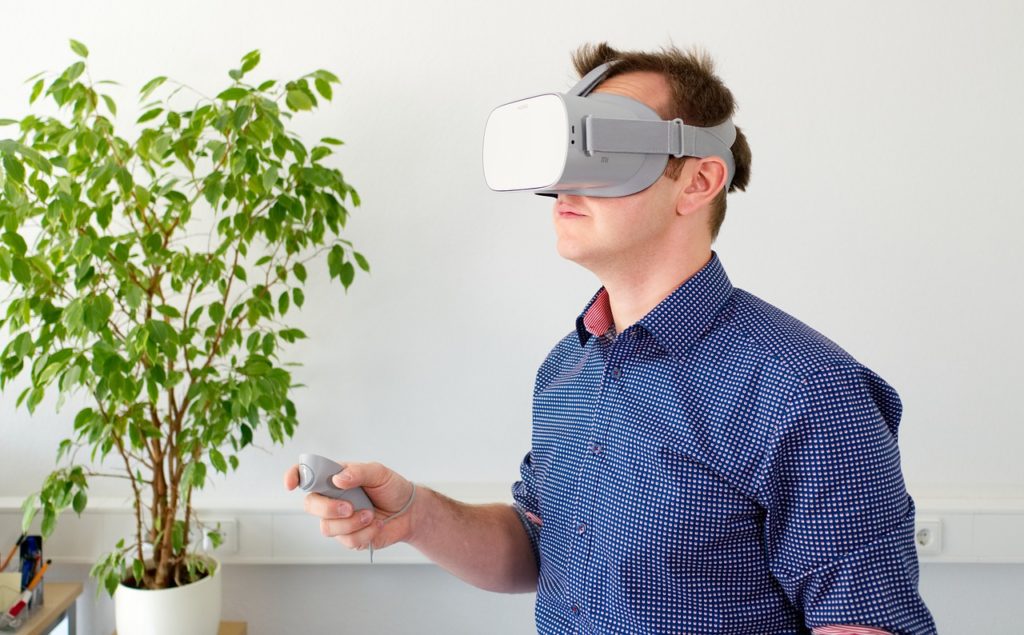 Mr Cunningham says the VRoom has already helped Lendlease identify and design out some safety issues much earlier in the design stage.

“VRoom allows us to conduct virtual safety and design reviews,” says Mr Cunningham. “We can collaborate in BIM in the design stages and through delivery with sub-contractors and wider workforce.

“We’re also able to conduct scenario planning and hazard awareness training using real-world 360-degree video within VRoom. The technology gives us a great opportunity to plan the logistics of working on site in advance, identifying any potential safety impacts while those in the supply chain are present.

“We have sequenced MEP (mechanical, electrical and plumbing) installation within the VRoom to ensure that any maintainable components can be accessed by the proposed user,” he adds.

“We also use it to ensure there is clear space around the plant and equipment so that a maintenance contractor can access necessary components. And it has been useful in ensuring handrails on terraced roof, with public access, are designed to be inherently safe and prevent future users being put at risk.”

“Our designers and construction teams use VRoom as a platform to help design out and eliminate foreseeable risk.

“We ask questions of our design teams that focus on providing the safest living and working environment possible, whether that be a potential homeowner or the facilities management team.”

Other uses of the VR Room on the Elephant Park Development

As well as the impressive 3D modelling of the Elephant Park development, which includes the largest new green space in central London for 70 years, the company has also been using the 360-degree room to explore health and safety issues in the real world as building work continues.

Members of Lendlease’s team have been using 360-degree cameras to film road junctions and building work in progress and then reviewing the footage in the VRoom.

“There are a number of restrictions around working on a live site and as such many of the things we can now share with our stakeholders, we previously weren’t able to,” explains Mr Cunningham.

“The real-life footage enables us to look at real-life situations, such as the separation of pedestrians and vehicles on site, without causing an additional safety issue while we do it.

“We’ve also found it a great way of engaging with the local community particularly with school children who normally wouldn’t be exposed to a construction site, but through this can experience the working dynamics – again without any health or safety risks.”

As part of the Elephant Park project, Lendlease has built a construction skills centre on the site, which is providing skills training in partnership with Southwark Council.

Staff at the centre have been able to go onto live parts of the project and film the day-to-day reality of working on a building site, which can then be played back in the Vroom for the students at the centre.

“Lendlease runs its own graduate programme because it is committed to promoting the construction industry as great career choice,” adds Mr Cunningham.

“VRoom enables us, as a team, to look at a situation and detract the safety issue and then find solutions to fix it. Graduates and trainees, who have limited experience on-site really value this experience. It builds confidence and helps them to recognise potential risks in a safe environment.”

In the meantime, the VRoom will play a key role in helping to make the project safer, both in the real and the virtual world. With virtual reality becoming more and more sophisticated, it can only be a matter of time before more developers turn to such immersive technology.

“We’re certainly sharing the learnings we have with the rest of the business,” adds Mr Cunningham. “Many of the people involved in our Elephant Park development, where the VRoom sits, work with people across the business so can feedback and get them involved where possible.”

Virtual Reality at Lendlease: Stepping inside a virtual world to make the real one safer Imagine being able to walk around a new estate that has not yet been built and spot any health and
Jamie Hailstone
SHP - Health and Safety News, Legislation, PPE, CPD and Resources