Ian joined Informa (formerly UBM) in 2018 as the Editor of SHP. Ian studied journalism at university before spending seven years in online fantasy gaming. Prior to moving to Informa, Ian worked in business to business trade print media, in the automotive sector. He was Online Editor and then moved on to be the Editor of two publications aimed at independent automotive technicians and parts distributors.
March 8, 2019 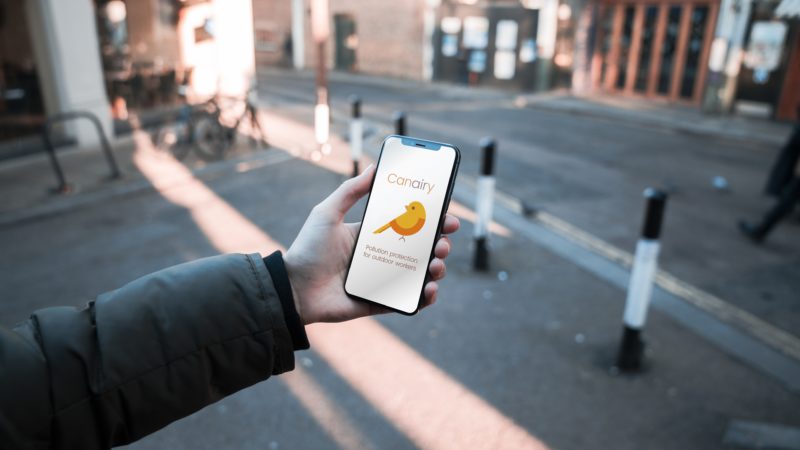 Launched today (8 March), to coincide with the British Safety Council’s Time to Breathe campaign, Canairy aims to give those who work outside all the information they need to help reduce their exposure to air pollution. It will also allow employers to gather intelligence to help them protect the health of their workforce.

Air pollution is considered to be the largest environmental risk to public health and is said to be responsible for up to 36,000 early deaths a year. Research from King’s College London suggests that more than 9,400 people die prematurely due to poor air quality in London alone. In 2013, SHP reported that the International Agency for Research on Cancer had classified diesel exhaust as carcinogenic to humans.

Matthew Holder, Head of Campaigns at the British Safety Council, told SHP that “air pollution gets a lot of coverage in London, and other big cities, but that the health of outdoor workers is often ignored. There is a gap in knowledge and awareness on the issue of outdoor workers and the regulations. No one really knows what their exposure limits are”.

“Employers have a general duty of care to their workers,” he added.

Matthew spoke about how London’s ‘huge problem’ with nitrogen dioxide. Canairy draws on the London Air Quality Network (LAQN) pollution map at King’s and the worker’s GPS to calculate a user’s exposure to pollution on an hourly basis. Once this exposure exceeds World Health Organisation’s (WHO) limits for the concentration of nitrogen dioxide, particulates and ozone, the app notifies the user and suggests tips to reduce their exposure, including working away from traffic, reducing strenuous work or putting up a screen barrier.

“We have a good idea of where the pollution is, what we don’t know is where the people are in relation to that. Using the data gathered, the app will help us to gain an understanding of what people’s worker exposure limits are,” continued Matthew.

Canairy will collect information to enable the mapping of where and to what degree exposure is happening across London. Employers will be able to access this anonymised exposure data relating to their workers and use it to inform how they schedule work for them to avoid the worst levels of toxic air.

Andrew Grieve continued: “As a group, outdoors workers are particularly vulnerable to long-term exposure to ambient air pollution. Within a workplace, the risk of people’s exposure to polluted air can be controlled using well-established methods, but this is more difficult for outdoor workers, many of whom work near or on busy roads.”

The app will gather data from the London network, which when combined with traffic data, will aid employers carry out health risk assessments and help them to decide when to plan and schedule work that reduces exposure limits.

Worker health is at risk

Lawrence Waterman, Chairman of the British Safety Council, said: “The HSE tells us that it doesn’t regulate the ambient environment, and the recent Clean Air Strategy had little or nothing to say about people who spend their working lives outdoors. These workers are caught in a blind spot and we think their health is at risk.

“By working with King’s College London and our members we have been able to bring technology and business together to raise awareness of the dangers from air pollution to outdoors workers. We want employers to use the information as part of their consultations with their workers and work together to reduce their exposure.

“We are calling on London-based employers to join those trialling Canairy and help us build an accurate picture of the exposure faced by outdoor workers. This information will be a cornerstone of future campaigns for better research into the links between occupation and health data. Given that we don’t even know how many outdoor workers there are in the UK, we need those authorities with responsibility for our health and environment to work together on this issue.”

Mitesh Solanki, Managing Director for Kier Local Authority Highways, commented: “At Kier, the health and wellbeing of our workforce is our number one priority and I’m really pleased that our LoHAC (London Highway Alliance) contract with TfL was the first to trial Canairy. This proactive approach to utilising the latest technology will help us reduce our people’s exposure to air pollution, which is a serious concern for all responsible employers.”

The Canairy app runs on both Apple and Android platforms.

Protecting the most vulnerable from fire risk