Hillsborough match commander David Duckenfield has been found not guilty of the gross negligence manslaughter of 95 Liverpool fans in the 1989 disaster. 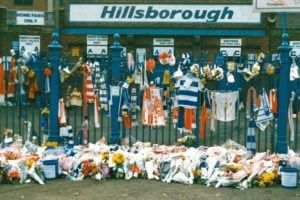 The former South Yorkshire Police Chief Superintendent, 75, was in charge of the FA Cup semi-final in which 96 fans were fatally injured. Men, women and children were crushed on the Leppings Lane terrace.

Mr Duckenfield, of Ferndown, Dorset, was cleared after a seven-week retrial at Preston Crown Court. Due to the law at the time, there can be no prosecution over the death of the 96th victim, Tony Bland. This is because he died more than a year and a day after his injuries were caused.

The jury at Mr Duckenfield’s original trial earlier this year failed to agree a verdict.

There were gasps in court as the seven women and three men on the jury returned the verdict, following 13 hours and 43 minutes of discussions.

Margaret Aspinall, whose 18-year-old son James was among those who died, said: “The question I’d like to ask all of you and people within the system is who put 96 people in their graves, who is accountable?”

A spokeswoman for the Crown Prosecution Service (CPS) said the verdict did not affect the findings of the Hillsborough inquests, which ruled the victims had been unlawfully killed.

Mr Duckenfield’s defence counsel argued the case against him was “deeply unfair.” Benjamin Myers QC told the jury his client had become “the focus of blame”.

“We say that is unfair, there are so many other people at fault, and so many causes,” the barrister added.

The prosecution alleged Mr Duckenfield had a “personal responsibility” for what happened at the match.

The court heard he had ordered the opening of exit gates at the Leppings Lane end of the ground at 14:52 BST on 15 April 1989 – eight minutes before kick-off, after the area outside the turnstiles became dangerously overcrowded.

More than 2,000 fans then entered through exit gate C, with many heading for the tunnel ahead of them, which led to the central pens of the terrace where the crush happened.

The former match commander’s solicitor, Ian Lewis, said: “David is of course relieved that the jury has found him not guilty, however his thoughts and sympathies remain with the families of those who lost their loved ones.

“He understands the public interest in this case, but would ask that his privacy and that of his family is respected, and will not be commenting further.”

Former Sheffield Wednesday club secretary Graham Mackrell was found guilty earlier this year of a charge relating to health and safety at the ground.

Hillsborough safety certificate out of date

During the trial, prosecutors told the jurors how “the scene was almost literally set” for failure. The ground’s safety certificate had not been updated or amended since it was granted in 1979 – a decade before the disaster, they said.

Richard Matthews QC told Preston Crown Court: “Few of those involved with the safety certificate appear to have performed their function diligently.”

The stadium safety certificate was “very out of date” by 1989, the jury was told. The arrangements at the FA Cup semi-final on 15 April 1989 meant 10,100 Liverpool fans had to get through seven turnstiles at the Leppings Lane end of the ground, the court heard.

Mr Matthews told the jury the Crown’s case was that “the risk of death was obvious, serious and present throughout the failings of David Duckenfield to show reasonable care”. He said it was an “extraordinary failure” for Mr Duckenfield not to have personal knowledge of the potential confining points and hazards to safe entry at the stadium.

The jury have been given a virtual tour of the stadium and shown the view from inside the police control box. Prosecutors showed what would have been on each of the television screens in front of Mr Duckenfield and his team on 15 April 1989.

Mr Matthews said the jury would hear from expert John Cutlack who estimated the capacity figure for the Leppings Lane terrace, where the fatal crush happened, should have been 5,426, rather than 7,200.

The jury was also shown a video of an FA Cup semi-final at Hillsborough in 1981 between Tottenham Hotspur and Wolverhampton Wanderers where the terraces became too full and the crowd was allowed to sit on the edge of the pitch.

Mr Matthews said the court would also hear evidence of police blocking access to the terrace during that match and stopping any more spectators from entering during the game.

Mr Duckenfield, of Ferndown, Dorset, is accused in relation to the deaths of 95 people* who were in the crowd at Sheffield Wednesday’s ground for the FA Cup semi-final between Liverpool and Nottingham Forest. The retired chief superintendent was South Yorkshire Police’s match commander for the game.

Former Sheffield Wednesday club secretary Mr Mackrell is charged with contravening the stadium’s safety certificate and a health and safety offence. Mr Mackrell was the club’s designated safety officer for the Hillsborough stadium.

*David Duckenfield is being prosecuted for the deaths of 95 people, rather than the 96 who were killed. This is becasue the 96th victim, Anthony Bland, died almost four years on. In 1989, legal guidance stated that an accused could not be held responsible for the death of anybody who died more than one year and one day after they suffered their injuries.

It is frustrating that the 96th victim of his incompetence will not be receiving justice due to a disgraceful technicality. The world has moved on ethically and so should the justice…erm… legal system. Moreover, since we know Duckenfield is both guilty and criminally negligent, why are we in need of further evidence? Surely enough has come out to simply sentence him accordingly already and South Yorks police.

I always find this issue very controversial when we the football community say anything and are not a supporter of LIverpool. However, there are considerations to think about, one is competence of the individual – Duckenfield – was he an approved Match Commander, had he got the knowledge and experience of this type of event. Had formal lessons learned been conducted on the previous events that are indicated? Also, why was Hillsborough given the match by the FA? They are the controlling mind for the event? Why did they give the largest supported club the end where they had fewest… Read more »

Wazza, Spot on, and I couldn’t have put it better; Duckenfield is the scapegoat.Although many will disagree, the crowd was out of control, and I doubt anyone could have controlled it. It was a very unfortunate accident, and the club and police together were negligent.

Bazzer – I do agree that Duckenfield has been made the scapegoat – he wasn’t competent but shouldn’t have been put in that position, the stadium wasn’t suitable, the crowd management was woeful. However, blaming the fans is not on. I’ve seen lots of large football crowds (particularly at Elland Road over the last 35 years) and when they are managed properly as a group of people, they can’t get out of control. Simple planning and management which was well known at the time. This was a classic bottleneck crowd management issue caused by incompetent organisation at an unsuitable venue.… Read more »