Ian joined Informa (formerly UBM) in 2018 as the Editor of SHP. Ian studied journalism at university before spending seven years in online fantasy gaming. Prior to moving to Informa, Ian worked in business to business trade print media, in the automotive sector. He was Online Editor and then moved on to be the Editor of two publications aimed at independent automotive technicians and parts distributors.
August 9, 2018

Event safety: Rafting on the Thames

Once a year, Thames Water hosts a charity event on the River Thames to raise money for Water Aid. Here, we find out about the health, safety and security challenges of operating a public event in one of the world’s business cities. 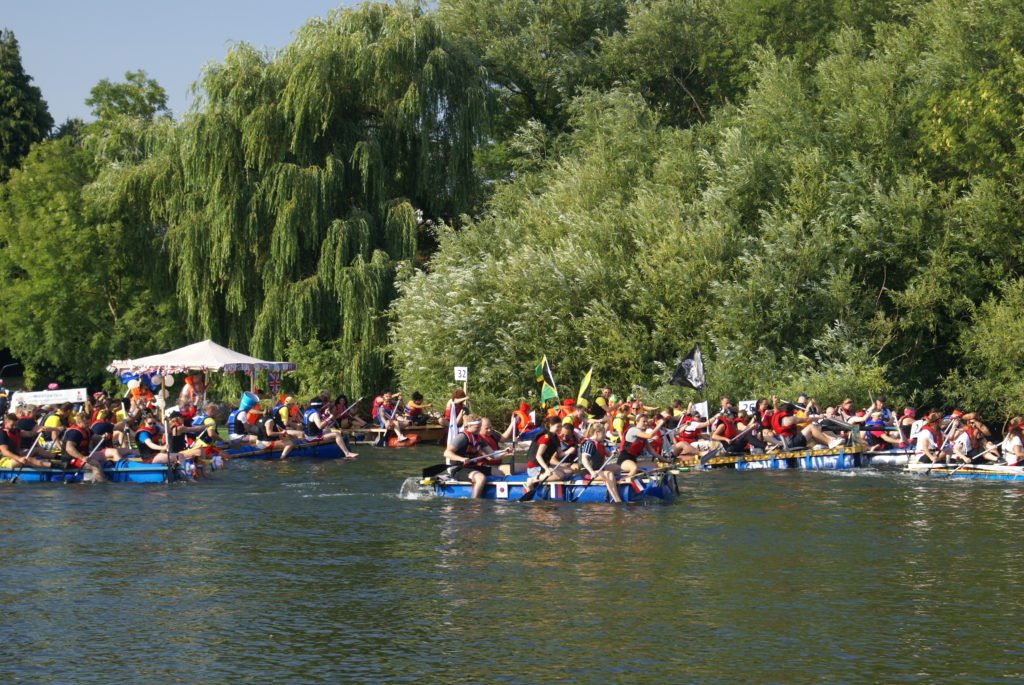 Thames Water’s annual Charity Raft Race tasks teams to build a raft from scrap material, before racing it along the River Thames. The aim? To raise in excess of £30,000 for Water Aid and having as much fun as possible in the process.

The event takes place at Reading Rowing Club and consists of 40 rafts, which is the maximum allowed on the river, each crewed by six men and women. Joining the rafts on the river are three support boats. In total, including support crew, around 400 people take part in the event.

The course has been used for over 20 years and involves racing through the left arch of Caversham Bridge, where there is a pedestrian bridge allowing for a pinch point which enables competitors to have fun splashing each other and forcing their way through. The bridge is clearly labelled with splash zone notices, warning members of the public that they could get wet from rafts using water pumps and pistols.

The team arrive at the venue at 07:30 and set about pressure washing the area, to remove any swan and geese faeces. Scaffolders then arrive to begin build-up, which includes a stage for live music, before other volunteers join them on site and start building tents, putting into place car park arrangements and traffic management.

The crews then arrive to start the raft build, The race itself starts at 18:00 and finishes at 19:00, followed by a presentation and departure by 20:00. The support team remain on site to clear up, before leaving at around 23:00. 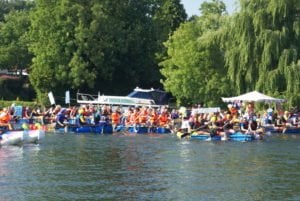 Large sections of the river cannot be closed off, so the team have to face a host of challenges that come with working in public space. There are a number of variables to take into consideration when letting people in makeshift vessels onto the water, such as crews having a few too many drinks, risk of drowning, and incidents from minor cuts to more serious injuries.

In the 15 years the event has been running, there has only been one major incident, which resulted in a finger being amputated.

In recent years, organisers have had to deal with the added threat of terrorism, with the danger of a vehicle being used to injure or kill. To combat this, a ‘ring of steel’ was formed using parked cars to prevent access to the main area. Access roads were also blocked with vehicles that could be removed in the event of an emergency.

A one-way traffic management system has been designed, allowing vehicles to travel in a clockwise direction using and ensuring lorries are parked separately to cars. Lorries are normally needed early after the race to remove rafts from the river using their hiab’s under a contract lift.

Public safety is maintained via an event crew, who are easily identified by wearing polo shirts with ‘Event Crew’ written on them, and this year were coloured purple with the raft race logo.

This year, a decision was also made to have a water tanker on site with final effluent from one of Thames’ sewage works, to act as a fire extinguisher as the grass field was so dry due to the hot weather.

Such was the concern over the heat this year, plenty of water was available to ensure everyone remained properly hydrated.

Safety on the river itself was provided by Thames Water’s Safety Team, which leads the way in water safety making sure its employees are equipped to work in flooded areas. They were on hand to provide support to any struggling team. This is only a precautionary measure, as it is a requirement that all crews are able to swim and must be wearing an approved life jacket.

On land an ambulance, crewed by two members with access to the NHS radio system, was hired to provide first aid and, if required, transport patients to the nearest A&E at Royal Berkshire Hospital.

Thames Water’s Chief Health, Safety & Security Officer, Karl Simons, said: “My Health, Safety and Security team do an amazing job every year in orchestrating this large multi stakeholder event. The trick is having the right robust risk mitigation controls designed and implemented behind the scenes that are all-but hidden to the event attendees and their families, enabling everyone attending to have a safe and secure fun day out to support their worthwhile charitable causes”.

Download Now
Event safety: Rafting on the Thames Once a year, Thames Water hosts a charity event on the River Thames to raise money for Water Aid. Here, we find out about the health, safety and security challenges of operating a public event in one of the world’s business cities.
Ian Hart
SHP - Health and Safety News, Legislation, PPE, CPD and Resources