A concert featuring American Grammy-winning artist Bruno Mars was forced to be temporarily halted in July, when on-stage pyrotechnics apparently caused a lighting rig to catch fire. Here, SHP has some guidelines for the safe use of pyrotechnics at events.

Mars was just minutes into his Glasgow Green show when a stray firework reportedly hit the light and set it ablaze.

The singer fled the stage and a safety alert was shown to fans which read: “This is a safety announcement. It is necessary to stop the show, temporarily. Further information to follow.”

The fire was quickly brought under control, allowing Mars to return and complete his set.

A report on Barbour by Association of British Theatre Technicians (ABTT) provides some guidance on the safe use of pyrotechnics at concert and theatre venues. 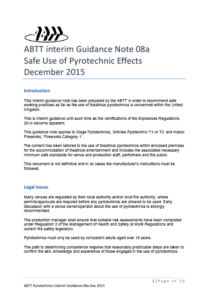 The reports states that “Many venues are regulated by their local authority and/or local fire authority, where permits/approvals are required before any pyrotechnics are allowed to be used.”

The report goes on to talk about the importance of planning in relation to then use of pyrotechnics. It asks, what are they trying to achieve and how appropriate are they to the venue or location?

A suitable emergency plan must also be discussed and documented with the venue to their approval.

It is important to consider all risk and identity suitable precautionary measures. Some examples of risk include:

The report also goes into detail about the safe procurement and storage of explosives.

For more information on Barbour, click here, or fill in the form on the right to download the ABTT Safe Use of Pyrotechnic Effects Guidance Report.