Ian joined Informa (formerly UBM) in 2018 as the Editor of SHP. Ian studied journalism at university before spending seven years in online fantasy gaming. Prior to moving to Informa, Ian worked in business to business trade print media, in the automotive sector. He was Online Editor and then moved on to be the Editor of two publications aimed at independent automotive technicians and parts distributors.
May 7, 2021

SHP speaks to Hilda Palmer, who was named SHP’s Most Influential Individual in health & safety in December, about the health & safety system in the UK, Grenfell and building safety, COVID-19 and the importance award recognition brings to her work. 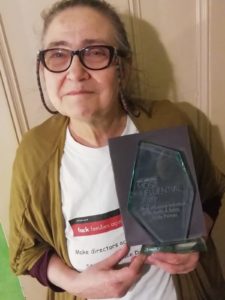 A former teacher, Hilda has an MSc in environmental resources and has been involved health & safety for over 30 years. She helped set up the Greater Manchester Hazard Centre, a voluntary organisation that came out of a movement of academics and scientists, wanting to work with workers and trade unionists on making work safer and make people more aware of the risks around work.

Scroll to the bottom of the page to listen to the full interview.

Hilda’s views on the health & safety system in the UK are no secret, which is why she has such a drive to raise awareness and enforce change to the way health & safety in the workplace is viewed by government and governing bodies.

“Worker health is not really regarded as very important. Workers are the canaries in the mine, they are exposed most considered last, if at all, in terms of trying to protect them or reduce their exposure to chemicals or every other sort of hazard, from musculoskeletal hazards, trip hazards, falls. Workers are essentially considered relatively disposable, and the COVID pandemic has shown, even more, how disposable they are actually regarded.”

Hilda believes there has long been a narrative pushed by politicians, media and business owners, that businesses must come first which, she says, has led to the idea that we can just scrap health and safety, without understanding and appreciating what it actually does and how it protects people.

This is nothing new and Hilda has been speaking about the subject for many years. In 2008, she wrote a piece for SHP, ‘The whole story’, where she outlined her views on the real cost of work. These calculations are published as part of International Workers’ Memorial Day, which takes place each year on 28 April.

“This is a class and economic issue. The lower your pay, the more likely you are to be killed at work, be injured at work, or be made ill by your work. That’s made more toxic and more deadly when you add in the discriminations of race, ethnicity, sex, disability, and age. We do not have the health and safety system that the fifth or sixth richest country in the world should have.”

“The lower your pay, the more likely you are to be killed at work, be injured at work, or be made ill by your work.” 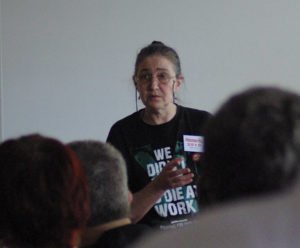 Part of Hilda’s work in recent years has supporting and campaigning around the issues of the Grenfell Tower fire in 2017. Hilda described the tragedy as a “cast iron example of what is wrong with deregulation. Grenfell was the bonfire of regulations that the Government demanded in 2010.

“We have been making it very clear that it comes about from deregulating, both the control of buildings and their fire safety outsourcing, the inspection of that process and also deregulating and privatising the Building Research Establishment, and all the systems that certified the products that go into construction.”

Speaking of the recent announcement from the Housing Secretary, who pledged an additional £3.5bn to tackle the cladding crisis, Hilda said it was “far too little, far too late”.

“It is an absolute and utter disgrace that all these years on from Grenfell, this has not been solved. It’s unacceptable that the cladding hasn’t been removed and that all the costs, and the fear and the worry has been placed on the people who bought buildings. They have every right to expect to be safe, but have discovered that they are responsible for the fact that their buildings were effectively wrapped in petrol and are now flammable and dangerous.”

“Grenfell is a cast iron example of what is wrong with deregulation. It was the bonfire of regulations that the Government demanded in 2010.” 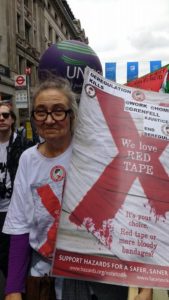 Another focus of the Hazards Campaign, a national organisation of all the different data centres, has been surrounding the prompt return of workers to their places of work, in a safe manner. The message being that, even in a pandemic, health and safety law still exists.

“Everything must be done on a precautionary basis because we don’t know enough about this new virus. We have provided recommendations on what needed to be done in order to go back to work, through our own independent SAGE studies and we’ve been arguing for the highest level of PPE and for much better ventilation.

“Ventilation in most of our workplaces has been poor for many years and workers have been complaining about the levels of dust and microbes, volatile organic compounds, bacteria, viruses and now we’ve got COVID. They are all building up in the air and if you don’t move that air by good ventilation, then people are going to get sick with COVID and sick from a lot of other things.

“So, we’ve got this theatre of hygiene, we’ve got workers exposed massively to dangerous combinations of cleaning chemicals and disinfectants and cleaning things manically. Whereas, what we really need to do is clean the air, ventilate. We’ve got to make ventilation a bigger issue. Ventilation isn’t just for COVID, it’s got to be for all working life, and we’re going to have to invest in ventilation in all our workplaces, including in schools.

“Ventilation isn’t just for COVID, it’s got to be for all working life, and we’re going to have to invest in ventilation in all our workplaces, including in schools.” 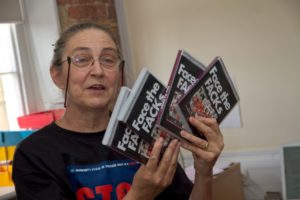 Hilda’s work, along with that of her peers, saw her nominated and subsequently voted SHP’s Most Influential Individual in health & safety for 2020. Due the nature of Hilda’s work and what she stands and campaigns for, what came through from many of the voters was that Hilda is a person many wish they had not met, but now that they have, she has empowered them to try prevent their misfortune happening to another family.

Following the award, Hilda made it clear that she’s not a huge fan of individual awards, but she did acknowledge that the recognition was “vital” for the work that her and her peers are carrying out. She said that she was “blown away” by the comments from people who voted for her, which you can read by clicking on the link above.

“I don’t suffer from false modesty. I’m modest because I have every reason to be modest. I’ve worked with some of the most brilliant people and we’re all little people standing on the shoulders of giants. There are giants within the Hazards movement, amongst the families that I work with and I’m particularly pleased to accept it on behalf of the work we do with safety reps, who are lifesavers in workplaces and do an incredible job, but also the families, Families Against Corporate Killers (FACK). The families are just some of the most wonderful generous people. Even in their most terrible times, having just lost someone they loved, what they say is, ‘we just don’t want this to happen to anybody else’.”

“I’ve worked with some of the most brilliant people and we’re all little people standing on the shoulders of giants.”

Read more on the Hazards Campaign.

In this episode, Hilda Palmer shares her views on the health & safety system in the UK, the importance of protecting workers as they return to the office and talks about her work with Families Against Corporate Killers (FACK).

“Workers are exposed most and considered last,” SHP meets Hilda Palmer SHP speaks to Hilda Palmer, who was named SHP’s Most Influential Individual in health & safety in December, about the health & safety system in the UK, Grenfell and building safety, COVID-19 and the importance award recognition brings to her work.
Ian Hart
SHP - Health and Safety News, Legislation, PPE, CPD and Resources

What should employers look for when recruiting and hiring a competent forklift truck operator?

“The lower your pay, the more likely you are to be killed at work, be injured at work, or be made ill by your work.” – So sadly true!!!

I fully agree, with Hilda that the target must be no accidents / fatalities and there is always room for improvement. However credit should be given to UK Regulators and Industry on how far we have progressed in H&S safety over the years. In Europe (based on HSE Statistics not my opinion) we are the 5th “safest” country for industrial fatalities behind Malta, Estonia and Ireland. We have a 6th of the Fatalities of the French. I haven’t just worked as an H&S professional in the UK, but in other countries including; USA, Pakistan, Yemen, Egypt, Kazakhstan, Singapore, Finland, Norway,… Read more »

Just so scary that dependent on “lone Maverick health and safety champions” to drive the profession forward against a tide of resistance and complacency to change the status quo surrounding expediency by employers to remain reactive regardless, how foreseeable even predictable risks let alone known hazards are. Even the HSE has been ducking their “duty of care” since they commissioning the meta review of medical research “Better Display Screen RR 561” published in 2007 and still no reference to, guidance or sign-posting to mitigative intervention “reasonable adjustments” or Accessibility Regulation published since their last Safety Alert ten years later in… Read more »