The winner of this year’s SHP Biggest Impact award was announced as Tina McGennity at the Safety & Health Expo.

The Biggest Impact award celebrates those that have joined the health & safety profession in the UK, within the last 18 months. A list of nominees was whittled down to a group of six finalists and a panel of experts has today named Tina McGennity as the winner for 2018.

Tina is Projects Division HSE Manager at JCA Engineering, having moved to the department from elsewhere within the company last year.

She received her award from Luton Airport’s Simon Bown. 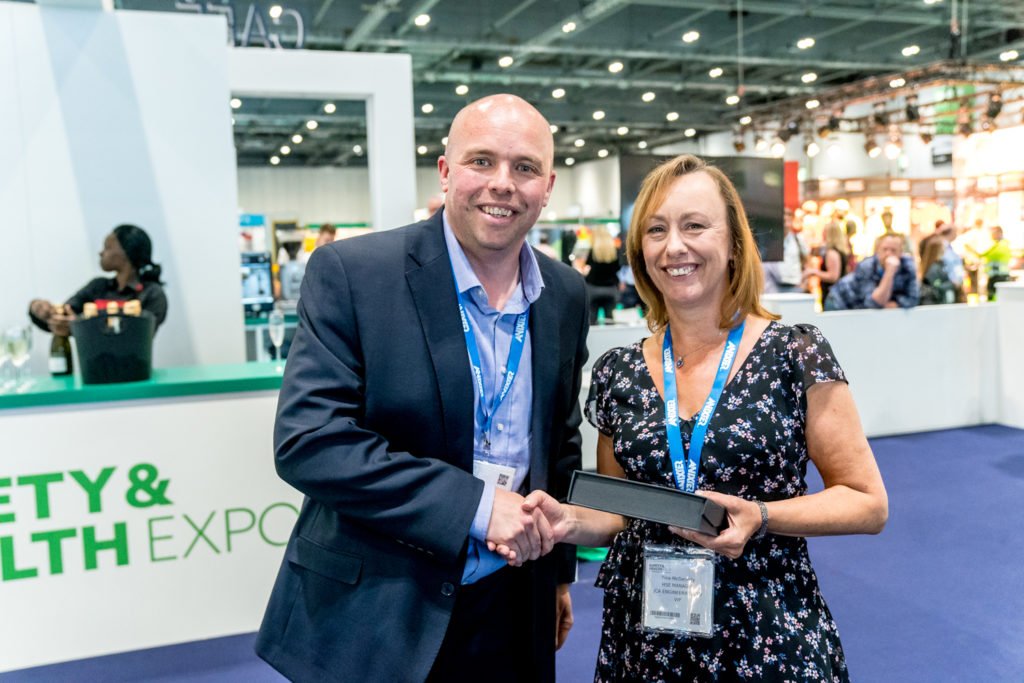 She arrived from a contract management role to take responsibility for all HSE-related issues across an entire construction division, Tina has been pivotal in leading cultural changes that saw JCA Engineering awarded the Gold Achievement award at the first attempt.

The judges were particularly impressed by the impact that Tina has had on her organisation within such a small time frame, overseeing a complete overhaul of the safety managements system and boosting the health & safety culture to the extent that she was presented with the company’s Employee of the Year award.

The panel emphasised that this showed not only how Tina is perceived within the company, but how it reflected that the organisation doesn’t have a stigma around health & safety. It was also noted how Tina is using her job to externally influence.

Comments from her nominee’s enthused about the support that Tina provides and how her passion for her role made employees feel safer.

Tina has been instrumental in developing a business-wide Monitoring Schedule that encourages all levels of the business to take their part in the safety of all and is now developing the Safe Systems of Work (SSW) for JCA’s construction division. She has been pivotal in rolling out a new core training package, which Tina has delivered for night shift workers outside of working hours.

Shortly after moving into health & safety, Tina completed her NEBOSH Construction certificate to enable her to take over responsibility of multi-million pound construction projects and is now working towards her NVQ Level 5 Health & Safety qualification, all while learning her role on the business’s construction sites.

Outside of her role, Tina has committed her spare time to assisting younger members of JCA in understanding the importance of health & safety and has been part of volunteer groups supporting the health & safety of local children’s play areas, another aspect that was particularly pleasing to the judging panel.

Congratulations to Tina and everyone else nominated for this year’s Biggest Impact award.

Earlier in the day, Jyssica Murphy was named as SHP’s Rising Star of 2018, while Sanjay Rajasekaran collected the International Rising Star award.