Ian joined Informa (formerly UBM) in 2018 as the Editor of SHP. Ian studied journalism at university before spending seven years in online fantasy gaming. Prior to moving to Informa, Ian worked in business to business trade print media, in the automotive sector. He was Online Editor and then moved on to be the Editor of two publications aimed at independent automotive technicians and parts distributors.
June 4, 2019

SHP caught up with 2018’s Most Influential Person in Health & Safety, Louise Taggart to find out how the last 12 months have been for her. 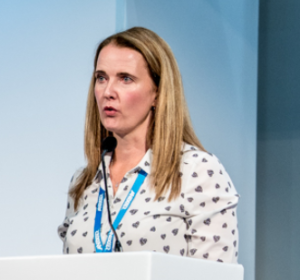 Louise Taggart is a Public Speaker, Campaigner and Founder of ‘Michael’s Story’, a heart-breaking tale about death of her younger brother Michael, an experienced electrician, in a preventable electrical incident in 2005. The incident drove Louise to tell her brother’s story and ensure that others don’t have to suffer the same tragic loss, leading to her being named as the Most Influential person in health & Safety for 2018 by SHP’s readers.

Louise was an employment lawyer in Scotland until the tragedy led her into the field of health & safety. She left her job to help convert the Scottish Hazards Campaign Group into a charity that provides a health and safety advice centre for workers, and through Michael’s Story, travels across the UK speaking to organisations and conferences about ensuring health and safety training, leadership and attitudes are effectively embedded in order to keep workers safe. In 2018 alone, Louise told Michael’s Story to over 7,500 people across varying industries.

She also works with Families Against Corporate Killers (FACK) to provide support and a voice to families who have lost loved ones. 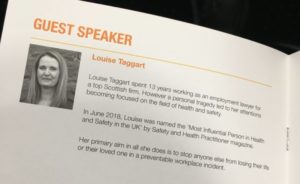 When told of her recognition, shortly before the award was announced at Safety & Health Expo last June, Louise recalls how she was brought to tears and was “gobsmacked”. She immediately telephoned her mother to share the news and her pride in being able to fulfil Michael’s legacy by campaigning for change, not just in the electrical profession, but in health & safety on the whole.

One voter commented: “I’ve heard Louise speak many times and each time have felt empowered to go back into the workplace and challenge processes and procedures.” To read some of the quotes from those who voted for Louise, click here.

Twelve months on, Louise says the award gave her campaign “added credibility,” certainly to the FACK group. “I think it told employers that they had nothing to fear by allowing me to speak and educate their staff.”

To vote for SHP’s Most Influential Person for 2021, click here.

Louise was speaking at Mace’s headquarters in London at an event called ‘Sparking Ideas: How can innovation and design improve electrical safety?