Jason Anker: “If I stop just one person from not speaking out, I’ll keep telling my story”

Paralysed due to a fall from height, Proud 2b Safe’s Jason Anker relayed his challenging personal journey at Safety and Health Expo 2017, in order to shift perceptions of risk on-site.

Anker, of training firm Proud 2b Safe – who has recently been named one of the top 15 most influential people in UK health and safety – gave a touching talk about his experience regarding the consequences of not drawing his boss’s attention to a danger on-site.

After a ladder on unstable ground slipped from beneath him, Anker’s 10ft fall has left him paralysed for the last 24 years; and the effects of that one decision have spread far and wide to his family and friends.

Now, over two decades after his fall, Anker told a captivated crowd his story.

If I can change just one person’s decision to draw their boss’s attention to a risk, then I have to keep telling my story

On 3 January 1993, married with two children, Anker was working as a roofing contractor. At 2.30pm Anker’s boss asked him to fix a leak on a roof. A two hour job, Anker was asked to do it in one.

He knew something wasn’t right. The ground was poor and he felt the ladder may not have been secure. But he didn’t speak up.  Instead, he got the job done.

However, while he descended, the ladder slipped, and he fell. At first he just thought he was just winded, but soon he realised that he couldn’t feel his legs.

In hospital initial findings from an X-ray looked promising, but after a CT scan examined him closer, Anker was given devastating news that he’d suffered massive spinal injuries and the doctors said he’d never walk again.

Following a major operation and months of rehab, Anker thought he’d one day learn to walk. But that was not the case, and he has spent the last 24 years in a wheelchair.

He said: “The not walking again was bad – but being told I was doubly incontinent and having to carry spare clothes around, in some ways was worse”. 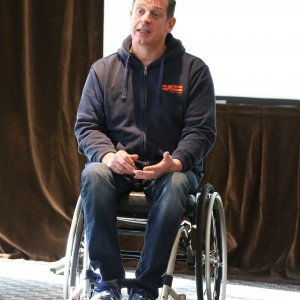 In April 1993, he was discharged, but came home to a new life after his wife left their home with the children.

His accident hadn’t just affected him but it had affected their marriage too.

His friends, not knowing how best to support him, drank with him, and soon drink became a problem. He took out his anger towards his mother, and she found it hard to see him.

Alcohol escalated to drugs and soon Anker had hit rock bottom. All because of one mistake.

In January 1995 after taking too many drugs, Anker woke up from a coma that he’d been in for 17 days. On day 15 they had considered turning the machines that were keeping him alive off.

On day 17, he woke up, but he had sadly suffered brain damage, leaving him with memory and speech issues.

At this point, he started to turn his life around, but it was a tough time watching his children growing up, playing football and riding their bikes and not being able to join in.

14 years after his accident, Anker received a cheque for £480,000 in compensation.

“But what’s it worth to spend the rest of your life in his wheelchair,” he said, “how much money would you put on that?”

“When my daughter got married, I couldn’t walk her down the aisle – what’s that worth?,” he continued, “when an accident happens, it doesn’t just destroy the life of the person who is injured, but their mum and dad, their partner, their children – and the effects last a lifetime.

“You think it’s OK to take a shortcut, you think these things happen to other people, but who is that someone else?

“Every day the first thing I see is my wheelchair. 24 years on my family are still affected by what happened on that day.”

He then started to tell his story and has become a very well-known face in health and safety. In 2015 he was awarded an MBE.

“But it’s still not worth it,” he says, “but now, if I can stop just one person from NOT speaking out, then that would be a great thing to come of this.”

Anker was announced last week as one of the top 15 most influential people in health and safety. To see the full list, click here.

Jason Anker: “If I stop just one person from not speaking out, I’ll keep telling my story” Paralysed due to a fall from height, Proud 2b Safe’s Jason Anker relayed his challenging personal journey at Safety and
Lauren Applebey
SHP - Health and Safety News, Legislation, PPE, CPD and Resources