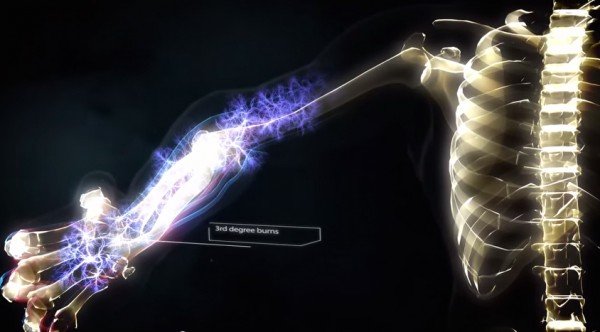 An award winning set of short films which feature harrowingly realistic stories of injuries and fatalities at work, will now be made available to businesses at no cost as part of Network Rail’s Life Saving Rules campaign, launched today, the first day of Health and Safety Week 2015.

The six raw and hard-hitting short films, which include working at height, driving and working with moving equipment, change the face of safety films as we know them – stripping the subject, quite literally, to the bare bones.

The films, which picked up the Grand Prix Award at the EVCOM Screen Awards in March, simply show the devastating effect an incident at work has on the victim, their colleagues, family and managers. They reflect the harsh reality of simple mistakes, both physical and mental; in a way which leaves the audience feeling as exposed as the shattered skeletons on the screen. They remind us how we all have the ability to take responsibility for our own actions and our own safety.

Now, as part of Health and Safety Week, Network Rail is making its films available to other businesses, hoping they will see the real benefits of them as they have done. The films, which include some strong language, can be viewed here:

The once internal campaign is now being offered at no cost to businesses like yours, to use as a tool for getting the attention of the workforce to get on board with taking health and safety seriously. The simple rules resonate at every level from the boardroom to the factory floor, and if applied practically could reduce injury, ill-health and even fatalities at work.

Sandy Bell-Ashe, safety awareness campaigns manager at Network Rail said: “Our Life Saving Rules are an integral part of working for Network Rail. These films got our safety messages across in a very direct manner, helping us work towards our goal of getting everyone home safe every day”.

“The challenge Sandy and the team set us was that while they loved the hard-hitting safety-dramas we’ve produced for Network Rail, with this project they had a smaller budget and needed 6 films. So how could we get a similar level of impact without seeing people hit by trains or electrocuted?” said Pete Stevenson, Executive Director of The Edge Picture Company who produced the films.

“Strong creativity often comes out of constraints and one reason why they work so well is that we leave a lot up to the imagination. Because the viewer has to join up the dots and complete the picture, the Life Saving Rules films have had a lasting psychological impact. I’m really proud of the way they’ve stuck inside people’s heads, changing behaviour and saving lives as a result.”