Safety professionals should be aware of the Bird/Heinrich Triangle, which shows that if you have enough incidents, then eventually you will have a serious injury.  Some people have proposed a model of slices of Swiss cheese where the holes line up, and an excellent article by Neil Budworth in the March 2013 issue of SHP talked about near miss data.  However, nobody, to my knowledge has properly explained why the Bird Triangle should be so.

The model I show below is based on probabilities, ranging from 0 (will never happen) to 100% (will happen every time) and shows what determines the different outcomes. 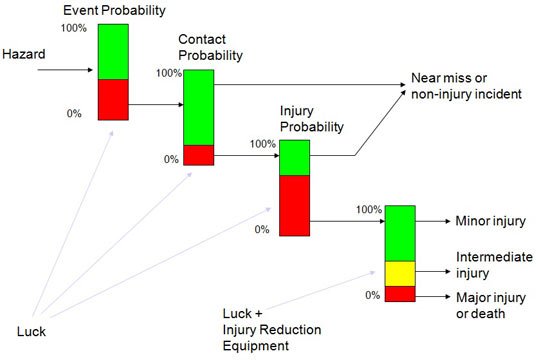 You could use 0 to 1 which makes it easier to multiply the different probabilities.

It is because of these probabilities that we can generate the Bird triangle, given sufficient data.

We can affect some of these probabilities, but others such as the injury probability, are normally out of our control.  And as a general principle, the measures to be taken should be as far left (what I call upstream) as possible.  That is why PPE is rightly regarded as the least preferable control measure as it is one of those which fit into the injury reduction equipment category and is on the right of the model.

If we take an actual example of poorly stacked reels shown below (note large diameter reels perched on top of smaller diameter reels), then we can look at the different probabilities

There is a probability of poorly stacked reels falling.  This is most likely to occur when vehicles are near reels such as when they are being moved.  A photograph (not in this article) taken the next day showed that it had all changed (with no improvement).  So therefore there was a high frequency of movement which would mean that the probability of a reel falling was high.

Then if contact occurs, there is the probability of injury.  With these reels, which can weigh several hundred kilograms, there is a high probability that any contact would be more than a glancing blow.

Finally, there is the probability of the extent of injury.  With these heavy reels, the probabilities of major injury and death are both high. 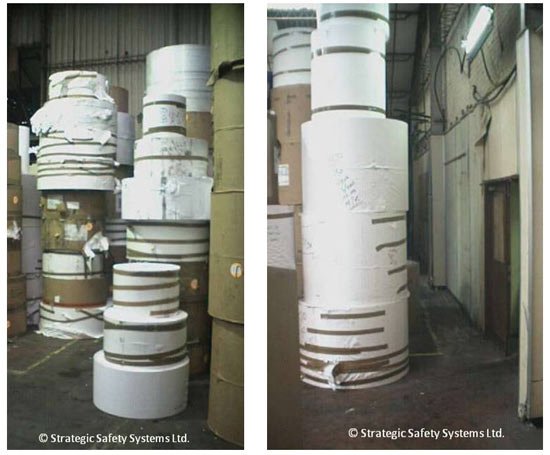 By examining the probabilities, we can see several remedial steps:

1.     Reduce the probability of toppling by better stacking practices, eg large diameters at the bottom.

2.     Reduce the probability of contact by storing the reels away from the walkway, moving the walkway elsewhere, or by building a steel cage that prevents a falling reel from reaching the walkway.

The injury and injury extent probabilities would remain unchanged, but because we have changed the upstream probabilities, this is no longer critical.

Once again, we have another H&S professional who is over complicating risk assessment. Why do we, as a profession, invent complicated methods to examine a situation, task or activity? If we expect employees to do dynamic risk assessment, take their part in group assessments and be engaged in safety; we need to keep it simple!!! A simple process of: What is it the hazard – how can it cause loss (and we include damage and business loss) – what are we doing now – and what more can / should we do. Encouraging lower grade employees (not meant to be… Read more »

I showed this to a couple of our guys at work and they really liked it. They could understand the split between incident & close call in the graphic and it helped them see why PPE should be the last resort. If something doesn’t work for you ignore it; it might be just the ticket for someone else.

It’s simpler to understand why there is split oppinion once you understand that it’s sometimes easier to get the go-ahead for a change to a workplace if you add “depth and value” to your pitch to managment. Particularly if you can’t just go fix it yourself or you are about to submit a bill for £400.00 for the day. Correct, this is and should be kept simple but the truth is that the operator would also be able to tell you the risks and the probability when they stacked the reels!

I have some difficulty with this article. Having studied the various accident triangles I can assure readers that they do not offer probabilities, you only have to compare the numbers within them to discover this. Neither is it the case that having less minor injuries will inevitably lead to fewer serious ones. There are numerous accident types that could not lead to more serious ones, they are what they are. Crossing the road with your eyes closed would offer a high probability of injury, so its best not to do it. In the Paddington case the light should have been… Read more »

Let’s take your example. Crossing the road is an event. If you do it with your eyes closed, you increase the probability of contact. The outcome of the contact would depend on the probability of the injury. The whole idea of the article was to show how probabilities cascade. If you don’t cross the road, then there’s no problem. If you keep your eyes open, then you change the contact probability. The whole idea of including the Paddington crash was to show how necessary it was to have fixed the light after the 1st SPAD.

I dont think showing fancy dan graphs to a couple of guys would have the same impact as saying ” If that reel “several hundred Kg” hits you on the head that hard had aint going to save you”.

Safety in the “reel” world.

I agree with Bob and Steve (above posters) entirely.

another academic stating the obvious and not progressing safety one iota. over complicating risk assessment. From the pictures even someone with a certificate will recognise the hazard exists and do something about it on the spot at the time

not run off back to his desk and write pages and pages of convoluted graphs and charts.

I don’t think it’s wrong to apply probability ratings for certain types of activity. But I do agree with what most people have said, and particularly with Percy regarding the triangle theories.

How can having a lot of minor accidents inevitably lead to a very serious one?

And is it not possible for an organisation with few minor accidents to have a fatality tomorrow?