Jamie Hailstone is a freelance journalist and author, who has also contributed to numerous national business titles including Utility Week, the Municipal Journal, Environment Journal and consumer titles such as Classic Rock.
February 13, 2019 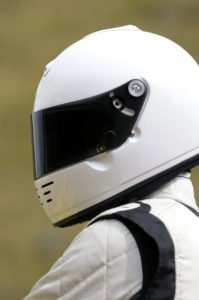 Ben Collins, who is also a championship winning Le Mans racing driver, has joined the campaign to remind drivers of the dangers of tailgating.

According to Highways England, one in eight of all road casualties are caused by people who drive too close to the vehicle in front, with more than 100 people killed or seriously injured each year.

And nearly nine out of 10 people say they have either been tailgated or seen it, while more than a quarter of drivers admitted to tailgating.

For a small minority of tailgating is deliberate, but for most it is unintentional by drivers who are simply unaware they are dangerously invading someone else’s space.

“I discovered the dangers of tailgating at a very early age – in an overly enthusiastic game of musical chairs,” said Mr Collins.

“The music stopped. So, did the kid in front of me. But I didn’t. I face-planted the back of his head instead. Following the vehicle in front too closely reduces your vision to zero, along with your time to react to danger. Stay safe, stay back and look ahead.”

And in-car research – using dashcams, facial recognition, emotion tracking and heart monitors – reveals that a driver’s typical reaction to someone who tailgates them is surprise, anger and contempt, with a spike in heart rate.

“It’s great to have someone of Ben’s experience backing the campaign and the message today is really simple around tailgating,” said Highways England’s Head of Road Safety, Richard Leonard.

“We know that if you get too close to the car in front, you won’t be able to react and stop in time if they brake suddenly.

“Tailgating also makes the driver in front feel targeted and victimised, distracting their attention from the road ahead and making them more likely to make a mistake,” said Mr Leonard.

“It is intimidating and frightening if you’re on the receiving end. If that leads to a collision, then people in both vehicles could end up seriously injured or killed. We want everyone to travel safely, so the advice is – stay safe, stay back.”

Download Now
Tailgating: Former ‘Stig’ backs motor safety campaign According to Highways England, one in eight of all road casualties are caused by people who drive too close to the vehicle in front, with more than 100 people killed or seriously injured each year.
Jamie Hailstone
SHP - Health and Safety News, Legislation, PPE, CPD and Resources

You won’t find the term ‘tailgating’ in the Highway Code.