Jamie Hailstone is a freelance journalist and author, who has also contributed to numerous national business titles including Utility Week, the Municipal Journal, Environment Journal and consumer titles such as Classic Rock.
February 1, 2019

Roadwork safety: Half of motorists drive dangerously through roadworks

More than half of road users have admitted driving in ways that put themselves or roadworkers at risk, according to a new survey. 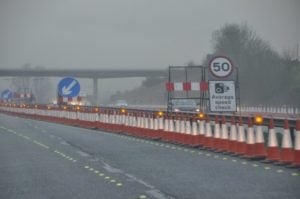 The survey commissioned by highways maintenance company Amey found 59% of road users acknowledged that they are not as safety-conscious as they should be when negotiating roadworks, while almost three quarters (74%) admitted to exceeding speed limits set to protect those working at these sites.

One in five (19%) of drivers admitted not maintaining a safe distance from other vehicles and 14% said they did not pay attention to road workers.

The Amey research data shows that younger drivers are more likely to flout road safety laws; for example, 82% of 17 to 24-year olds admit to breaking speed limits in 50mph controlled zones, while a further 8% say they go over 65mph.

However, the overall majority of those questioned (87%) also acknowledged that being a road worker in the UK is a dangerous occupation.

Amey has staff working on local and main roads up down the country and has experienced first-hand the impact of reckless driving.

Since 2017, more than 210 incidents were reported and the number of accidental incursions (where drivers accidentally enter roadworks) for the same period reaching close to 5,500.

“It’s extremely concerning that so many drivers appear to be wilfully ignoring safety advice, and driving without due care through roadworks; especially when they acknowledge that working on our roads is a very dangerous job,” said Amey’s Managing Director for Highways, James Haluch.

“I am only too aware of the suffering of those who are injured, or killed, while simply doing their job. In many cases, even if the physical injuries heal, the trauma remains in some form, changing their lives and that of their families forever.

“This research illustrates that road users need to reflect on their behaviour when driving through roadworks to consider the impact on road workers across the UK. I appreciate this is a significant challenge and may take years to achieve, but we need to keep the conversation going to make changes – our people have the right to return home to friends and family safe and well at the end of the day.”

“We know that Britain’s roads are some of the busiest in the world. In terms of overall road safety, current national figures show casualties are at their lowest level for over 40 years – however overall injuries to the 4,000 road workers on the network has risen,” said Mr Lee.

“At HTMA, through our Health, Safety & Wellbeing Group, we’ve pushed for many years to raise awareness with the general population and the authorities, of the threats to the roads workforce and to tackle road works incursions and abuse.

“I hope that by continuing to highlight the danger, through the likes of this public research that Amey has commissioned, a change in motorists’ behaviour will be brought about.”

Download Now
Roadwork safety: Half of motorists drive dangerously through roadworks A survey commissioned by highways maintenance company Amey found 59% of road users acknowledged that they are not as safety-conscious as they should be when negotiating roadworks.
Jamie Hailstone
SHP - Health and Safety News, Legislation, PPE, CPD and Resources