New mobile phone laws, making it illegal to use a hand-held mobile phone while driving under virtually any circumstance, come into force on 25 March. The move follows a follows public consultation which found that 81% of people supported the proposals. 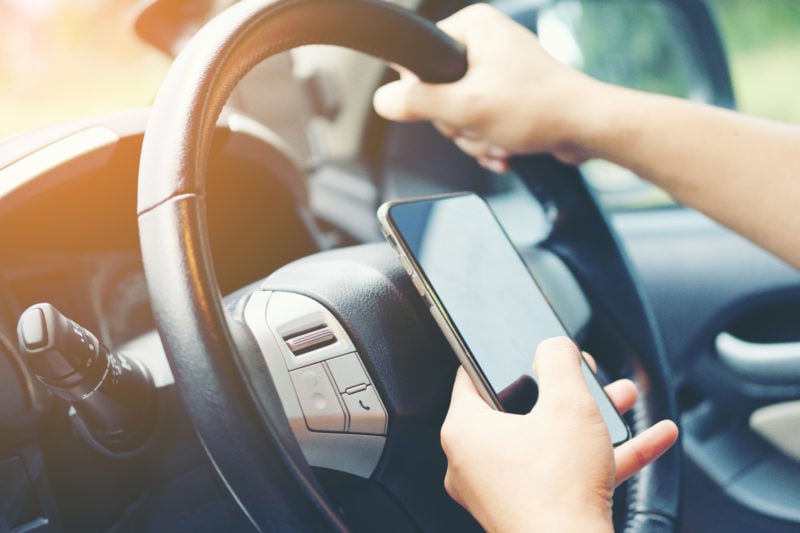 Since 2003, it’s been an offence to use a hand-held mobile phone or similar hand-held device while driving in Great Britain. From 25 March 2022, laws will go further to ban drivers from using their phones to take photos or videos, scroll through playlists or play games.

This will mean anyone caught using their handheld device while driving could face a fine of up to £1,000 as well as 6 points on their licence or a full driving ban.

The government’s THINK! team has launched an £800,000 awareness campaign to remind drivers not to use a handheld phone at the wheel and of the penalties if choosing to ignore this new law.

Millions of young people will start seeing the adverts in the coming weeks, showing friends appearing in the back seat to intervene when the driver becomes tempted to use their phone behind the wheel.

The campaign will run across video on demand, online video, social media channels and radio in England and Wales until the end of April.

Drivers will still be able to continue using a device ‘hands-free’ while driving, such as a sat-nav, if it’s secured in a cradle. They must, however, always take responsibility for their driving and can be charged with an offence if the police find them not to be in proper control of their vehicle.

The offence (under Regulation 110 of the Road Vehicles (Construction & Use) Regulations 1986) is specified as using a hand-held device for ‘interactive communication’: principally phone-calls and messages or accessing the internet. Using the device does not need to lead to an accident for the offence to be committed. The offence carries a minimum penalty of points. This means an offender would lose their licence after two offences or, for new drivers who have held a licence for less than two years, a single offence would lead to their licence being revoked. There is also a similar offence in Northern Ireland.

Why is the Government changing the law?

The law is being updated to keep up with technology.

Since 2003, mobile devices have become capable of performing many more tasks beyond ‘interactive communication’. They are used to play music and games, take photos or videos, or scroll through articles. According to the Government said the “array of functions that mobile phones can now perform has outgrown the wording of the offence and its parameters”.

What led to the change?

The perceived need for a law change has been highlighted by recent court cases, particularly that of DPP Vs Barreto in 2019. In that case, a driver who was filming a nearby road accident while at the wheel was found not guilty because they were not using a hand-held mobile phone for ‘interactive communication’. The judge said they were therefore out of the scope of this offence.

Following this, the Government consulted on changes to the law. According to the consultation, “the Government considers that all use of a hand-held mobile phone while driving is reckless and dangerous, and not just when being used for the purposes of a call or other interactive communication.”

According to Department for Transport statistics, in 2020, 17 people were killed, 114 people were seriously injured, and 385 were slightly injured in road traffic accidents in Great Britain where the driver was using a mobile phone.

Just over 80% of the 423 respondents to the consultation agreed with the Government’s proposal to expand the offence to cover uses beyond ‘interactive communication’.

On 1 February 2022, the Government laid a Statutory Instrument under the ‘made negative’ procedure, titled The Road Vehicles (Construction and Use) (Amendment) (No. 2) Regulations 2022 which will enact the proposed changes.

What will the new law mean?

The new law will amend the 1986 Regulations and will mean the offence is triggered whenever a driver holds and uses a device.

According to the SI’s explanatory notes, the offence “will cover any device which is capable of interactive communication even if that functionality is not enabled at the time.” This would include a device being in flight mode.

In the text of the SI, the meaning of ‘using’ a phone will be expanded to cover the following:

As well as an existing exemption which allows a driver to use a phone in emergencies, the new law creates one new exemption. Drivers will be permitted to hold and use a device while driving to make a contactless payment at a payment terminal for goods or services. The vehicle would have to be stationary, and the item being paid for must be provided at the same time or after the contactless payment is made. Such a transaction might include paying for a car park or drive-through coffee using a phone.

A mobile phone for navigation will continue to be legal, as long as it is kept in a cradle and not in the driver’s hand. The Government will update both the Gov.uk guidance on Using a phone or a sat nav when driving and the Highway Code, to reduce misunderstandings about the new law, particularly on the difference between hand-held and hands-free use.

The law will come into force on 25 March 2022, and will have effect in England, Scotland and Wales.

‘No excuse for picking up a mobile phone when driving’

Speaking after the announcement, Edmund King, AA President, said: “There is no excuse for picking up a mobile phone when driving so we are pleased this loophole will be closed.

“Phones do so much more than calls and texts, so it is only right that the law is changed to keep pace with technology. Tweets, TikTok and Instagram snaps can all wait until you park up.

“These new rules will clarify the law and help drivers realise that this dangerous act can have the same consequences and be as socially unacceptable as drink driving.

“If you can’t resist the temptation to pick up your phone, then you should convert your glovebox into a phone box.”

Transport Secretary Grant Shapps has declared zero tolerance as the new rules come into force: “Too many deaths and injuries occur while mobile phones are being held.

“I will do everything in my power to keep road-users safe, which is why I am taking a zero-tolerance approach to those who decide to risk lives by using their phone behind the wheel.

“I’m ensuring anyone who chooses to break this vital law can face punishment for doing so and we’ll continue our efforts to ensure our roads remain among the safest in the world.

“By making it easier to prosecute people illegally using their phone at the wheel, we are ensuring the law is brought into the 21st century while further protecting all road users.

“While our roads remain among the safest in the world, we will continue working tirelessly to make them safer, including through our award-winning THINK! campaign, which challenges social norms among high-risk drivers.”