The implementation of new ‘all-lane running’ smart motorways has been paused while the safety of the initiative is assessed, the government has said. 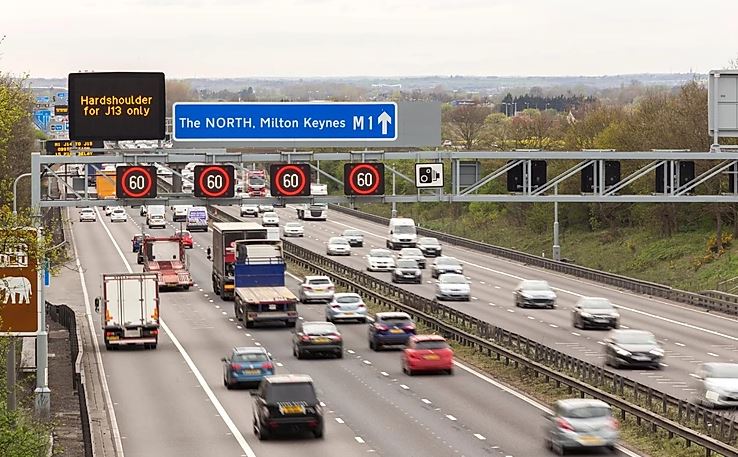 According to government figures, between 2014 and 2019, 38 people were killed on smart motorways.

Using the hard shoulder as a permanent live traffic lane increases capacity, but critics say it has contributed to road deaths.

Because of this, the rollout of new smart motorway schemes will be paused until a full five years’ worth of safety data is available, as the Department for Transport (DfT) invests £900 million to improve safety on existing all-lane running (ALR) motorways.

However, hard shoulders will not be reinstated on current stretches of all-lane running motorways.

The government’s decision comes after MP’s said in November there was not enough safety and economic data to justify this type of route.

In the event that a car breaks down on all-lane running smart motorways, drivers are meant to aim for emergency refuge areas. But critics say the schemes can leave cars stranded in fast-moving traffic.

Schemes that are already under construction will go ahead, according to the government, and on existing all-lane running motorways, £390m of public funds will be provided for more refuge areas and technology to detect stopped vehicles. This will represent a 50% increase in places to stop by 2025, providing added reassurance to drivers.

Refuge areas should be no more than 1.5km apart, and should be 1km apart where possible, as opposed to the 2.5km between them currently.

The Department for Transport (DfT) said where hard shoulders have been removed, they will not be reinstated, as they “do not always provide a safe place to stop” and could also push more traffic onto local roads.

Transport Secretary, Grant Shapps says: “While our initial data shows that smart motorways are among the safest roads in the UK, it’s crucial that we go further to ensure people feel safe using them.”

National Highways will also improve communications so drivers are better informed about how to drive on smart motorways.

National Highways CEO Nick Harris adds: “While we pause those all-lane running schemes yet to start construction, we will complete the schemes currently in construction. We will make existing sections as safe as they can possibly be and we will step up our advice to drivers so they have all the information they need.”

As part of its review, the government has said it will look as how so-called controlled motorways, which have a hard shoulder, compare with all-lane running ones.

The Royal Society for the Prevention of Accidents has welcomed the decision. Rebecca Needham, Road Safety Officer at RoSPA said: “RoSPA has been calling for an increase in the number of emergency refuge areas on ‘all lane running’ (ALR) smart motorways and we are pleased to see that the Department for Transport has committed to a retrofit a further 150 emergency refuge areas to existing schemes.

“It is vitally important that a programme to retrofit emergency refuges on ALR motorways is put in place, because between 2015 and 2019, 39 people died on UK smart motorways, according to figures from National Highways.

“Currently on ALR motorways, the emergency refuges are spaced at up to 1.6 miles apart. Today’s report adopts RoSPA’s recommendation to reduce the distance between safe stopping places on ALR motorways to a maximum of 1,500 metres and down to 1,000 metres (0.75 miles) where physically possible.”

“RoSPA also embraces the recognition in the report that further effort is required to better inform motorists about how to safely navigate smart motorways and we look forward to supporting this”.

Highways England’s top tips for driving on a smart motorway:

To read the Transport Committee’s report in full, click here.

Download Now
Government delays rollout of further all-lane smart motorways in response to Transport Committee report The implementation of new ‘all-lane running’ smart motorways has been paused while the safety of the initiative is assessed, the government has said.
Safety & Health Practitioner
SHP - Health and Safety News, Legislation, PPE, CPD and Resources