Barbour EHS is an online subscription service providing access to essential legislation, guidance and practical tools to help keep you compliant.
May 18, 2022

Rail funding cuts will compromise passenger safety and could mean the loss of train services, the TUC has said in a recent report. 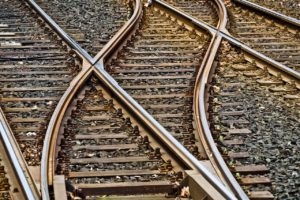 According to the report, Network Rail plans to cut annual expenditure by £100 million, mainly through the loss of 2,500 rail maintenance jobs.

Previously unpublished RMT analysis of Network Rail data finds that this will lead to 670,000 fewer hours of maintenance work annually.

The TUC says it is impossible to make those cuts without losing many safety-critical jobs.

Network Rail responsibilities include track maintenance – essential to avoiding accidents fatal like Hatfield, which was the result of the metal tracks fatiguing.

Network Rail is also responsible for maintaining signals to ensure trains are on time and prevent collisions, for the electricity supply to the network, and for the safe upkeep of buildings including public spaces like the UK’s largest rail stations.

In addition to major cuts at Network Rail, the Treasury has ordered the Department for Transport to slash its annual budget by 10% as part of last year’s Spending Review, says the report.

The TUC has made several recommendations, including:

“But if the Network Rail cuts go ahead it will mean the loss of safety-critical jobs and a greater risk of serious accidents like Stonehaven, Potters Bar and Hatfield.

“Ministers must not risk passenger safety through funding cuts to Network Rail.”

On the threat to train services, Frances added: “Our railways are still recovering after the pandemic. The last thing the government should be doing is slashing funding.

“But ministers are demanding cuts that would disrupt services and see fewer trains on our railways.

“We need a better vision for the future of Britain’s railways than commuters packed like sardines in unsafe trains.

“Ministers must recognise that world’s most successful railways are in public ownership, with public subsidy instead of money sucked out by shareholders.”

On rail funding and reaching net zero emissions, Frances added: “We all want to reach net zero and stop climate chaos, and rail is one of the greenest ways to get around. Ministers need to make rail the most attractive option for more journeys. But you can’t do that by cutting back on safety and services. We need to build a bigger and better rail service.”

Download Now
Rail cuts will compromise safety with loss of 670,000 maintenance hours, according to TUC report  Rail funding cuts will compromise passenger safety and could mean the loss of train services, the TUC has said in a recent report.
Barbour EHS
SHP - Health and Safety News, Legislation, PPE, CPD and Resources