Barbour EHS is an online subscription service providing access to essential legislation, guidance and practical tools to help keep you compliant.
May 24, 2022

The Rail Accident Investigation Branch (RAIB) is investigating an incident involving a train passing over three sets of points at the north end of Peterborough station at a speed of 75mph (121km/h). 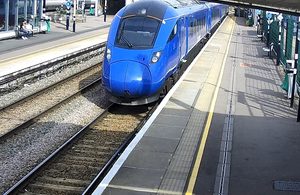 This was above the maximum permitted speed limit for these points of 25 mph (40 km/h). Passing over the points at this speed meant that the train suddenly lurched sideways.

The sudden movement of the train resulted in some passengers being thrown from their seats and in luggage falling from the overhead storage in the passenger compartments. This resulted in a number of minor injuries being sustained by passengers. The train subsequently came to a stand beyond the far end of Peterborough station. The train did not derail during the incident, and no damage was caused to the infrastructure of the railway, or to the vehicles involved.

The train involved in the incident was not due to call at Peterborough and had originally been approaching the station on a fast line, before being routed onto a slower line via the points where the overspeed occurred. The route onto this slower line was being displayed on the signal situated on the approach to the points.

The RAIB investigation will seek to identify the sequence of events which led to this incident. It will include consideration of:

The investigation is independent of any investigation by the railway industry or by the industry’s regulator, the Office of Rail and Road.

Findings, including any recommendations to improve safety, will be published at the conclusion of the investigation.