An investigation by the Rail Accidents Investigation Branch (RAIB) into an incident where track workers were struck by a train at Margam, South Wales, on 3 July 2019, has found that Network Rail had ‘not adequately addressed the protection of track workers from moving trains’. One of a series of underlying factors which led to the deaths of two men. 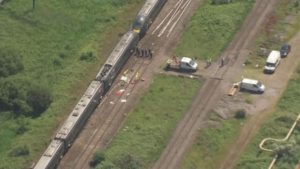 At around 09:52 hrs on Wednesday 3 July 2019, two track workers, Gareth Delbridge, 64, and Michael Lewis, 58, were struck and fatally injured by a passenger train at Margam East Junction on the South Wales Main Line. A third track worker came very close to being struck. These three workers, who were part of a group of six staff, were carrying out maintenance work on 9577B points. The driver had made an emergency application of the train’s brakes about nine seconds before the accident and the train was travelling at about 50 mph (80 km/h) when it struck the track workers.

The RAIB investigation into the incident uncovered several factors which led to this situation, relating to the work itself, the way the safe system of work was planned and authorised, the way in which the plan was implemented on site, and the lack of effective challenge by colleagues on site when the safety of the system of work deteriorated.

It has also highlighted Network Rail’s ‘long-term failure to improve the safety of people working on the railway’ was an underlying factor in the deaths. It has considered why Network Rail had not created the conditions that were needed to achieve a significant and sustained improvement in track worker safety. Four underlying factors were identified:

In the report, RAIB has made 11 recommendations, nine of which are addressed to Network Rail and cover:

Read the report in full, here.

The RAIB’s interim report, in July 2019, was that that the accident occurred because the three track workers were working on a line that was open to traffic, without the presence of formally appointed lookouts to warn them of approaching trains. All three workers were almost certainly wearing ear defenders, because one of them was using a noisy power tool, and all had become focused with the task they were undertaking. None of them was aware that a train was approaching them until it was too late to move to a position of safety.

Working on an open line without a formally appointed lookout meant that no single individual stood apart from the work activity at the points with the sole responsibility of providing a warning when trains approached. The absence of a lookout with no involvement in the work activity removed a vital safety barrier.

This report described the initial findings and conclusions. Including, amongst others: