The Government has released interim figures on the number of successful applications for funding of fire detection and alarm systems under its Waking Watch Relief Fund. Ron Alalouff reports for IFSEC Global… 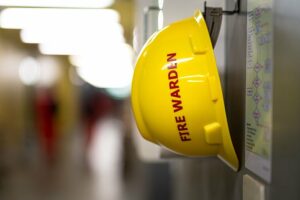 The £30 million fund, announced in December 2020, is available to fund alarm systems for the common areas of buildings where waking watch measures – due to unsafe cladding on buildings – have been implemented. The Government view is that while waking watch is an acceptable risk mitigation strategy in such buildings, alarms are preferable on the grounds of safety and cost-efficiency.

The latest provisional data shows that as of 30 June 2021, applications to the fund for a total of 292 buildings were made, of which 191 were successful. This amounted just over half (£16.5 million) of funding under the scheme.

Although some aspects of the data are missing, the mean cost of carrying out waking watch outside London was calculated at £110 per dwelling per month.

In order to be eligible for the Waking Watch Relief Fund, a building must:

Social sector buildings where the Registered Provider can show that waking watch costs have been passed to leaseholders, and that the costs of installing an alarm will fall on them, are also eligible. The Government’s aim is to incentivise building owners and managers to install a common alarm system and to reduce the dependency on waking watch.

The fund builds on updated guidance from a National Fire Chiefs Council stakeholder group on buildings that change from a ‘stay put’ to a ‘simultaneous evacuation’ strategy. The guidance “strongly recommends” that where a change to simultaneous evacuation is deemed necessary beyond a short period of time, a temporary common fire alarm system should be installed. It says such a system will generally provide the earliest warning to occupants, rather than relying on a waking watch, and that building owners should move to install common fire alarms as quickly as possible, to reduce or remove the dependence on waking watches.

This is the clear expectation for buildings where remediation cannot be undertaken in the short term (12 months or less) and should reduce the financial burden on residents where they are funding the waking watches. The guidance points out, however, that the installation of a common alarm is not a long-term solution or replacement for remediation of unsafe cladding.

A spokesperson for the Ministry of Housing, Communities and Local Government (MHCLG) told IFSEC Global: “We prioritise action on buildings 18 metres and above because the risk to multiple households is greater when fire spreads in buildings of this height.

“We have provided a £30m Waking Watch Relief Fund to support the installation of fire alarms to replace costly waking watches in buildings above this height. The fund is consistent with expert guidance published by the National Fire Chiefs Council that alarms are preferable to costly waking watch measures.”

Separately, one housing association is said to be saving more than £250,000 a month in waking watch costs having installed a temporary wireless detection and alarm system across four sites involving 700 flats.

Drop in to a recent FIREX webinar, which looked at the legislative and systemic changes required in fire safety, and the wider building sector, to ensure buildings are made safer for occupants.

Download: Fire safety in 2020 eBook – A year of challenges and change.