Jamie Hailstone is a freelance journalist and author, who has also contributed to numerous national business titles including Utility Week, the Municipal Journal, Environment Journal and consumer titles such as Classic Rock.
February 27, 2019

In the last few months, SHP Online has reported on the growing number of frontline workers who are being equipped with body cameras to protect their personal safety. These have included police officers in Humber, NHS paramedics and parking wardens, who have all been issued with the equipment.

Now rail operators are joining the long-list of organisations to rollout body cameras to staff in various parts of the country.

According to the British Transport Police (BTP), there were 6,960 incidents of assault against rail staff in 2015-2016 of which 27% (1,879) were physical assaults and with many incidences estimated to have gone unreported.

And over the twelve months to end of May 2018, train operating companies notified the Rail Delivery Group, which represents the rail industry of 1,435 incidents of physical assault against staff.

Speaking to SHP Online, SE Railways’ General Manager for Revenue, Crime and Enforcement, Siobhan Bradshaw said its Revenue Protection Officers have access to one each from a pool of cameras at each depot.

Conductors and On-Board Managers also have them at all but one depot, and can take them on a “needs be” basis.

“We additionally have a pool of cameras that we use for individuals or locations on a temporary, reactive or emerging basis – for example a repeat victim, or a problematic train,” Ms Bradshaw said.

“BWV cameras affect the behaviour of staff and passengers,” she adds.

“We have feedback from front-line colleagues that tells us, just by their presence, the BWV will diffuse situations. A Cambridge University study has shown the reductions of violence to staff who actually wear them and, as an unlooked-for benefit, its presence and use on a station will reduce violence overall on that station to all staff who work there.

“The footage captured not only provides evidence for prosecutions against offenders, it also offers unique learning and development opportunities allowing staff to understand the effects of their behaviour, unpick a situation and learn how to improve how they handle similar situations going forward.”

Fall in assaults on staff 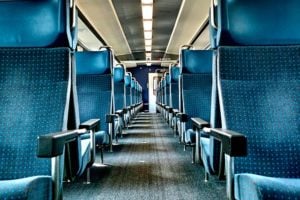 “We are also looking to reduce workplace violence through a range of tactics including bespoke training, close working with British Transport Police around reporting, data and intelligence sharing, positive police reactions, raising court awareness and internal and external campaigns,” she adds.

In October last year, Virgin Trains announced it was the first UK train operator to provide body worn cameras to cover all its frontline people, resulting in assaults on staff falling by more than half.

Following a pilot scheme, the operator rolled out 275 cameras across the entire network.

Since this was completed in February 2018 Virgin Trains staff said assaults on staff have reduced from 20 in March 2018 to six in September.

And results from a survey revealed that more than 80% of staff felt safer at work while wearing bodycams and nearly 90% would recommend them to colleagues.

In another first for the rail industry, Virgin Trains has given the British Transport Police (BTP) direct access to footage from the cameras, if needed, thanks to a state-of-the-art cloud-based system that allows them to view the footage when the cameras are docked – speeding up investigations and possible prosecutions.

Lewis Komodromou, a Revenue Protection Team Leader for Virgin Trains, was assaulted by a passenger who had an invalid ticket at Euston station.

Lewis was shoved, subjected to verbal abuse and threatened. Other colleagues intervened, and the man was arrested. The 26-year-old suffered a shoulder injury in the assault.

“I was extremely shocked after the ordeal. I hadn’t really been in that type of situation before so I didn’t know how to react. Luckily my Virgin Trains colleagues were there to make sure I was okay,” says Mr Komodromou.

He adds that the rollout has addressed the safety concerns of his team.

“My colleagues have said they feel much safer wearing the bodycams and they have more confidence in situations which could escalate. The response has been really positive,” he says.

“Since the bodycams have been introduced it has stopped lots of situations that could otherwise get out of hand. The bodycams have also been great for passing on evidence needed for the BTP.”

In 2017, rail staff at stations across the country trialled body worn cameras and this was overseen by the University of Cambridge.

The trial took place at 33 stations, which have 1,572 employees across 127 barriers, and was the first time that body worn cameras had been used by an organisation not involved in policing. The results of this research showed that physical assaults against rail staff fell drastically (by 47%).

But the question remains, do body cameras deter physical attacks and protect workers? Or do they simply help with potential prosecutions, by ensuring any attacks are properly recorded?

Robert Watts, VP of Facial Recognition at Digital Barriers, which is a leading developer of body-worn cameras, notes that while such devices “do well to establish liability after the fact”, they also “do very little to protect staff in the very thick of frontline operations”.

Instead, Mr Watts believes that footage from the body cameras should be live streamed to give frontline workers, like railway staff extra protection.

“Safeguarding the user means equipping them with technology that can reliably and securely live stream video back to a nearby colleague or command and control centre, so that in the event of an incident the appropriate action can be taken,” says Mr Watts.

“Live-streaming video from body worn cameras can provide a number of unique benefits across a variety of different sectors. For example, most of the employees in the UK’s rail industry work alone and sometimes at night, therefore their safety and wellbeing is paramount.

“With a live streaming body worn camera, an employee can trigger an alarm which would then alert the control centre to a potential issue, immediately streaming live footage and audio of the incident back to base.

“With this real-time situational awareness users can make better informed decisions and take instant action, providing the employee with greater peace of mind. Similarly, the tech can be used to protect police officers and other first responders, ensuring authorised personnel give those in the field the best possible guidance in critical and time-sensitive scenarios.

“Live streaming from body worn cameras offers those concerned with mission critical surveillance such as law enforcement a means to do more with less, particularly when police officers roles are being extended far beyond their traditional remit.”

See PPE put through its paces at Safety & Health Expo, 18-20 June at ExCeL London, in the new PPE Attack Zone.

The PPE Attack Zone subjects PPE to rigorous, real-time, visual tests that demonstrate how PPE is accredited and provide evidence of the efficacy of different products.

Registration is now open, click below to secure your free place.

Most shared PPE articles so far this year