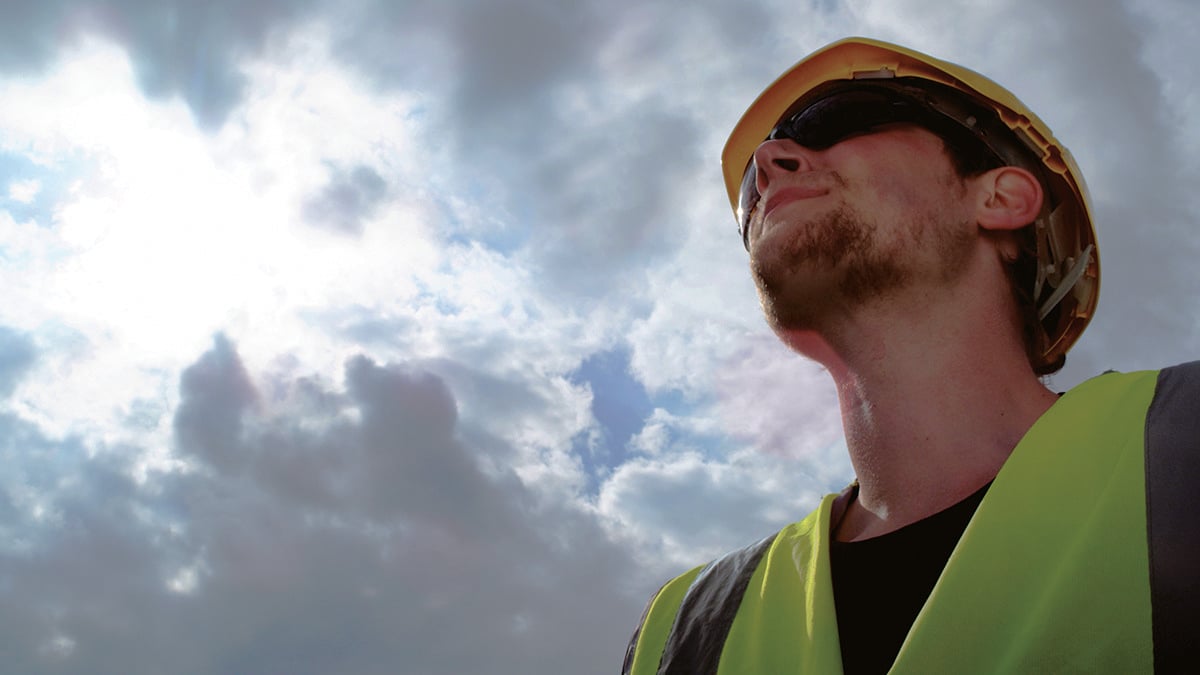 Outdoor workers could be at risk of developing skin cancer unless they take precautions. Paul Madgwick offers some practical guidance for those working outside.

How common is skin cancer in the UK?
Skin cancer is the most common cancer in the UK with just under 116,000 new cases reported annually.[1] However, Public Health England has advised that there is a vast under-reporting of cases and it estimates that the actual number could be up to 46 per cent more.[2]

Cases have increased overall by 6-8 per cent every year since the 1960s. Since the 1970s, the number of cases of the most serious form of skin cancer has quadrupled.[3]

More than seven people a day are dying from skin cancer in the UK (2,786 deaths annually).[1]

How much does skin cancer cost the UK?
The annual cost to the NHS has been calculated at £112m. This figure accounts for only 40 per cent of the overall cost, the rest being met by businesses.

Arguably, the real cost is to a person’s state of wellbeing and mental health once diagnosed.

Those who have had skin cancer are nine times more likely to get further skin cancers, adding to the trauma.

How many cases are considered occupational cancer?
This is a difficult question to answer thoroughly as under reporting is even worse for occupational classification.

HSE commissioned a team led by Dr Lesley Rushton to assess the burden of occupational cancer in Great Britain. The report found that skin cancer had the second highest number of occupational cancer cases in men and third highest in women. Of all occupations, the construction industry had the most skin cancer registrations, with 55 per cent of all registrations. It also accounts for 58 per cent of total deaths.[5]

What are the causes of skin cancer?
In the UK, 96 per cent of all skin cancer cases reported, cited sunlight or ultra violet (UV) radiation, commonly referred to as solar radiation, as the cause.[6]

There are three types of radiation created by the sun. Infra-red light which is felt as heat on the skin, visible light which you see and ultra violet or UV light which you cannot feel or see. It is this UV that can lead to skin cancer.

Skin cancer develops when the DNA within skin cells become damaged and the body cannot repair the damage. The damaged cells grow, divide and multiply creating a tumour.

Can skin cancer spread to other parts of the body?
After initial growth at the visible area/ surface of the skin, the cancer may spread down into deep areas of the skin. The most serious type of skin cancer tumour can, in its later stages, spread cancerous cells through the lymphatic system and lymph nodes affecting internal organs such as the respiratory system, liver, brain and bones.

But the weather in the UK is rarely sunny
Due to the unpredictable weather in the UK, people’s attitudes and behaviours to the sun appear very different to countries known to be hot and sunny, such as Australia and the USA, where skin cancer has a much higher public profile, with national awareness campaigns.

Who is at risk?
While many people like to be out in the sunshine, there are many who have no choice through their occupation. Research has shown that construction workers are the most at-risk group with some trades being up to nine times more likely to get skin cancer than other workers.[7]

What measures can be taken to minimise the risk of skin cancer?
As a health and safety practitioner, it is important, first of all, to understand the issue and to be able to raise awareness of the risks. Where the outdoor task cannot be eliminated, then it is important to understand what measures or series of measures are available and can be implemented to minimise risk to the worker.

A global literature review highlighted ten sun-safety measures, which are listed in order of popularity of use by UK construction workers.[6]

Drink plenty of water
Water is important for healthy skin, which in turn will contribute to reducing the impact from the sun on your skin.

Use sunscreen
Sunscreen or sun lotion is the obvious protective choice when working out in the sun, however, there are three issues with this. First of all, people often do not apply enough to all exposed areas of skin, which typically includes the neck, head, ears and sometimes areas of the back or legs. Second, people do not leave enough time for the sunscreen to soak in before going outdoors. Third, people often do not re-apply regularly during the day.

The sunscreen selected should have a sun protection factor (SPF) rating of 30 and a UVA four-star rating.[8]

Check skin
The earlier skin cancer is detected and diagnosed, the more effective the treatment will be. Therefore, it is important to visually check the body on a monthly basis.

The process involves starting at the top of your body and working your way down, paying particular attention to the areas of skin that are typically uncovered and exposed to the sun.[9]

The key elements to look at are:

Checking moles is very important as the most aggressive form of skin cancer often starts from moles. People should visit their GP if any of the above points are found.

Wear sunglasses
Sunglasses, usually safety glasses, should be assessed for the work environment in which they are to be used.

The sunglasses selected should be a wrap around type to prevent sun creeping in at the sides and should be marked UV400 and should offer 100 per cent UV protection.

Wear long, loose clothing
Clothing designed for work outdoors in sunny, hot weather is available. The clothing should be quick drying, high wicking (to remove sweat from the skin quickly) and have a UV protection rating (UPF) of 30+.

Avoid mid-day sun
Cancer Research UK advises that UV levels are highest from April until mid-September between the hours of 11am and 3pm. During these times, if practicable, work in direct sunlight should be avoided.

Provide shade/cover
Where no natural shade is available then, if practicable, shades should be provided. The shade should have a UPF of 30+. Consideration should also be given to a flame retardant material.

Job rotation
In situations where it is not possible to avoid people working in direct sunlight and shade cannot be provided, then thought should be given to rotating workers to minimise potential exposure to direct sunlight.

Hats and neck cover
This measure is an important one as 80 per cent of skin cancers are on the head or neck so should be one of the first to be considered. The fabric should have a UPF of 30+. For those required to wear safety helmets, attachable neck protection is available.

Check UV index
There are several apps available for smart phones which, as part of the weather forecast will give the UV rating (low, medium or high) for the day.

My research has shown that the use of a selection of the measures alongside a practical awareness campaign has a positive impact on combating this very real occupational health issue.[10]

IOSH is working to raise awareness of occupational cancers through its No Time to Lose campaign. As part of the campaign, it is publishing new research on the impact of solar radiation on outdoor workers later this month, along with new free resources designed to help businesses tackle the risks. Find out more at www.notimetolose.org.uk

Paul Madgwick is a construction health and safety manager

Company fined after worker is struck by falling objects

When are we allowed to return to the office?