Hand Arm Vibration Syndrome (HAVS) is an emerging occupational health issue. In this guide Dr Roger Cooke explain the protective measures that can be taken to reduce its incidence. 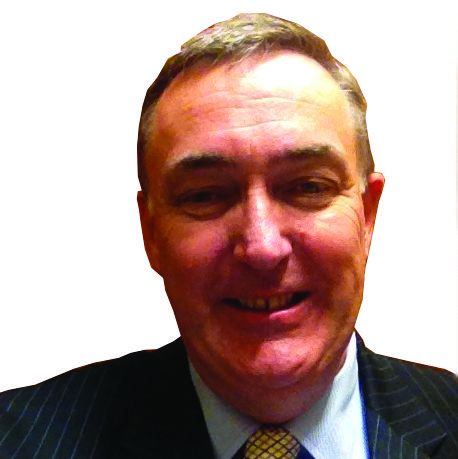 Dr Roger Cooke is a consultant in occupational medicine at the Institute of Occupational and Environmental Medicine, Birmingham University

What is hand-arm vibration syndrome (HAVS)?

Hand-arm vibration syndrome (HAVS) is the term used to describe the array of symptoms that results from exposure to hand-transmitted vibration. It is subdivided into three components.

The vascular component is the very specific colour changes that occur in the fingers on cold exposure, known as Raynaud’s phenomenon and previously referred to as Vibration White Finger. The name of the sensorineural component is perfectly descriptive – it is damage to the nerves that causes sensory symptoms of tingling and/or numbness.

It is believed that vibration exposure may also contribute to the development of carpal tunnel syndrome (CTS), affecting the median nerve at the wrist, and having similar sensory effects but may also affect motor function – i.e. the strength of particular muscles in the hands. Confusingly, CTS can also cause Raynaud’s phenomenon. The third component is referred to as the musculoskeletal component, and is generally less well defined or understood.

It is known that those exposed to vibration have a weaker grip than those who are not so exposed. Many workers describe cramps and locking of the fingers after using vibratory tools. Although there have been suggestions of a link, evidence is lacking to show that vibration exposure causes arthritis, Dupuytren’s fibrosis or other musculoskeletal problems such as tennis or golfer’s elbow.

Who is at risk of developing HAVS? 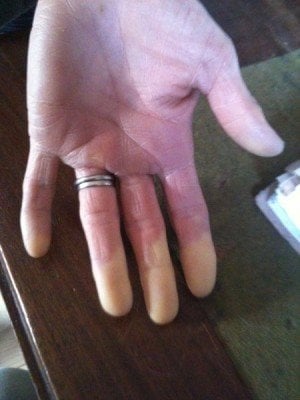 A wide range of tools can be associated with vibration exposure. The common feature is that they all provide a source of vibrational energy, which is what causes the tissue damage. The more energy transmitted to the operator’s hands and fingers, the greater the tissue damage, and hence cumulative total lifetime dose is a key factor. Whether or not an individual develops symptoms also reflects his/her individual susceptibility to vibration, which generally cannot be determined.

The condition attracted wide attention when British Coal was found to have been negligent and many mineworkers developed HAVS. While it was initially seen as a condition affecting those working in heavy industries, such as steel manufacture, engineering, shipyards, forestry, mining and quarrying, road repairs and construction, it is recognised as a potential risk to diverse groups such as those using brush cutters and strimmers, or those working with power tools on production lines, or in vehicle repair .

How can occupational health practitioners help minimise the impact? What role is there for workplace health surveillance?

As with other occupational hazards, the role of the occupational health professional is to assist in the identification of the hazards, assessment and reduction of the risk to workers, and identification and control of the health effects. Systems are available to measure individual exposure to vibration and their use should be encouraged wherever there is a risk of significant exposure.

There are a range of other conditions that can cause similar or even identical symptoms to those of HAVS, and careful health assessment is essential to ensure appropriate management of those. In the early stages of HAVS, symptoms may reverse if exposure ceases, so there is a key role in ensuring that those with such symptoms have the opportunity of considering alteration of work practice to ensure that symptoms do not become permanent and debilitating.

How to conduct a HAVS Risk Assessment

Is there any specific legislation in place to protect workers?

The Control of Vibration at Work Regulations 2005 fall under the umbrella of the Health and Safety at Work etc. Act 1974 and cover hand arm vibration as well as whole body vibration. These regulations place a number of obligations on employers. Arguably, the most important of those is to reduce individual exposure so far as is reasonably practicable.

The Equality Act is likely to apply to those with severe sensorineural disease causing functional impairment.

Those with significant vascular disease or severe sensorineural disease are likely to be eligible for industrial injuries benefits.

HSE has produced a useful exposure calculator. How does this work in practice?

The HSE calculator is a useful way of estimating total daily exposure, based on the vibration level of the tool and the daily duration of use. It is particularly useful because it calculates the total daily vibration exposure for those employees who use several different tools during the working shift.

The risk assessment of HAVS requires knowledge of the vibration characteristics of the tools being used. How is the energy transmission best measured?

The key issue is how much energy is transmitted into the hands or digits. However, this is not possible in practice so work has concentrated on measuring the energy characteristics of the tool, while assuming a uniform transmission to the worker. Vibration energy consists of movement in three planes, each of which must be measured and included in the overall calculation; failure to do so is likely to underestimate total vibration dose.

The accelerometer used to measure the vibration level should be fastened to the tool or work piece, as close as possible to where it is held. I have heard of these devices being clamped to the worker’s finger, hand or wrist. That is inappropriate because it will not accurately assess vibration exposure while also carrying a risk of injury to the subject.

For employers that carry out a health surveillance programme, what’s the best approach when it comes to clinically assessing and managing those who are exposed to significant levels of hand-transmitted vibration?
A tiered approach to health surveillance is a cost effective and efficient means of monitoring the workforce. While questionnaires can be used to identify those with relevant symptoms, it is essential that appropriately trained and qualified occupational health nurses and doctors are used to provide the higher levels of surveillance and formal diagnosis.

Tier 5 health surveillance as defined by the regulations – standardised tests – has a very specific role in assessment of the severity of stage 2 sensorineural disease and is not an alternative to careful clinical assessment by an appropriate occupational physician.

What help can be provided for those workers who are already showing early signs of HAVS?

There is little effective treatment for the symptoms of HAVS. However, if the condition is diagnosed in its early stages the prospects of recovery are reasonable following cessation of exposure to handtransmitted vibration. Unfortunately, sensorineural HAVS – nerve damage – is much less likely to recover than the vascular component.

Wherever HAVS is diagnosed, the vibration risk assessment should be reviewed, and steps taken to ensure that exposure is reduced so far as is reasonably practicable. Because it is sensorineural damage that causes most functional impairment and therefore impact on everyday life, it is particularly important to ensure that no worker progresses to severe (stage 3) sensorineural disease.

This disease has potential to cause significant incapacity, but is a perfect example of how good occupational health and safety practice can ensure that no employee finds himself or herself in that situation.

Why is managing HAVS important?

HAVS (hand-arm vibration syndrome) is a debilitating disease, which affects both circulation and fine nerves in the fingers, as well as being a causal factor for Carpal Tunnel Syndrome. It can result in pain in cold weathers and permanent loss of sensation.

There is a legal duty to manage the risk from HAVS under the Control of Vibration Regulations 2005. According to HSE, HAVS Vibration White Finger (VWF) is the most commonly prescribed disease under the Industrial Injuries Disability Benefit scheme for the last ten years, (although the number of new cases of VWF has fallen significantly over that period) and is one of the highest causes of RIDDOR reportable health conditions. Employers therefore have a duty to protect the health of their staff, as well as reducing their civil and criminal liability.

How do you assess the risk?

Risk assessment should identify who is exposed undertaking what type of activity with what type of tool and for how long (trigger times). Having good data on exposure levels and exposure times is important; manufacturers have a duty to provide vibration levels, but bear in mind that these may not reflect how the tools are used in a particular application.

Additional workplace monitoring may therefore be necessary. Trigger times should also be estimated, although it is generally better to devote resources to reducing the risk than establishing elaborate tool-timing regimes. The HSE ‘points system’ is straightforward way of estimating vibration exposure.

How do you control the risk?

The general hierarchy of controls H&S practitioners should be familiar with certainly applies to HAVS, i.e. can such equipment be avoided (remote operations etc.); careful job planning can often identify ways to avoid or reduce use of vibrating tool use.

An effective purchasing, involving technical expertise should be able to identify whether lower vibration tools are available. Cheaper ‘DIY-type’ tools are often the worst. Remember there is no effective PPE to reduce vibration levels.

HSE do not endorse the use of so-called anti-vibration gloves (although keeping hands warm is an important control measure). Tools often deteriorate with time and wear and vibration characteristics change; maintenance is therefore an important consideration within a risk control strategy.

Specialist techniques which involve assessing the vibration frequency spectrum can be a diagnostic measure to help identify worn components which increase the overall vibration levels.

Effective control should also consider the individual and health surveillance should be a part of the risk management strategy. Methods are available to assess the early stages of the condition before it gets too bad.

These include questionnaires and tests, which can assess any sensory or circulatory impairment. Other medical conditions can produce similar symptoms, so it is important that an occupational health professional is involved in this assessment. Check regularly before it is too late.

There are things the operators themselves can do to reduce their exposure risk, e.g. using the tool effectively, not pressing too hard and bypassing anti-vibration controls in the equipment, keeping hands warm, avoiding smoking – particularly close to starting work. Heaving regular breaks from tool use as opposed to long continuous periods of operation should have less health impact.

Very good article on a topic that still falls under the radar or into the too hard basket when it comes to good management of hazardous activities.

Dear Dr Cooke, Thank you for this interesting article. I understand how the vascular stage is calculated, using the Griffin scale but how is the sensorineural stage calculated? How would one know whether the sn score is >3and19,? I cannot fathom this out. I would really be interested in knowing.
Kind regards
Sandy

Not enough is being done on site by employers employees site agents and the company’s themselves, a big building company I’m working for has no havs measures in place whatsoever, if they don’t acknowledge it the chances are your boss won’t leaving us wide open to it, I know this first hand, I’ve see a Lad on a disc cutter for 5 hours with a few fag breaks in between, no gloves, no dust mask and no water, this goes on all the time, the site agent sees all this, HSE should be insisting companies know more about it so… Read more »