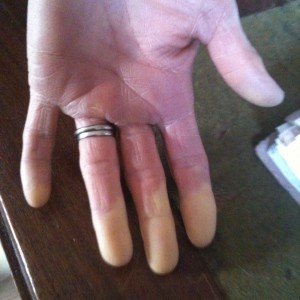 Hand Arm Vibration Syndrome is caused by an over exposure to vibrations when, for example, using handheld power tools. Symptoms include bouts of vibration white finger, where fingers lose all feeling and turn white in cold temperatures, muscle fatigue, potentially resulting in disability, and in some cases carpal tunnel syndrome.

Symptoms can take time to become apparent but once evident there is no treatment to reverse the harm and quality of life impact for sufferers is extreme. Day-to-day activities such as pulling up a zip or holding a glass are affected.

Traditional methods of regular assessment and generic control measures can help some but, inevitably, not all workers and can result in an underestimation of vibration exposure by up to 76%, putting people at serious risk. 10% of workers exposed at what is termed the Exposure Action Value and which many might consider a safe level, will get Hand Arm Vibration Syndrome within 12 years.

Alan Finley, a HAVS sufferer said this of the impact the disorder has had on his life: “When I first started there were no such things as monitoring or anything like that. You would grab a tool and use it. You didn’t know the consequences or what damage it was doing to you.

“I would wake up in the middle of the night with cramps. It would be like as if you had been lying on your hands and they had gone numb. Even if I picked up a little drill to do a few bits and bobs around the house, I felt the tingling and would be in constant pain.”

Costs to employers
Workers who suffer from HAVS are often forced to change jobs or quit work entirely. With a lack of skilled workers, this can cause real issues for businesses as well as people. The costs to employers go way beyond the costs that are insured. For every £1 recovered through insurance, costs a company £10 in uninsured costs.

Harry Gardner, a Health, Safety and Environment Consultant, believes employers should go above and beyond what regulations demand: “There is no such thing as a safe level of vibration, if you are working to minimum standards, you are just dicing with a guy’s health. We should always be striving to achieve the lowest possible level.”

In 2019, the HSE published the second edition of L140 which outlines what an employer’s duties are under the Control of Vibration at Work Regulations 2005 as they relate specifically to HAV.

Technology, that has become available since the legislation came into force in 2005, can however enable managers to go above and beyond to protect their workers by providing a heightened yet practical real-time risk assessment. More accurate tool use tracking and real time vibration exposure data improves the visibility of worker exposure to vibration. By providing uniquely representative risk data for each individual an employer is better enabled to implement controls to reduce their employees risk.

Jacqui McLaughlin, CEO of Reactec, said: “HAVwear provides real-time risk data specific to the person, and the results can be shocking, with some workers far beyond the suggested EAV level – something that cannot be appreciated if not collecting real use exposure data.

“We are witnessing the beginning of an industry shift, whereby innovative technology is enhancing health and safety standards and driving better visibility of workers at risk.

Wearable technology is doing so much for HAVS awareness by providing workers with real-time information on HAV exposure during tool use and with powerful analytics to ensure managers can act intelligently to manage future risk and to positively impact behaviour.”