Two soldiers died after a tank exploded because “a design flaw went undetected” on the vehicle’s gun barrel, according to a senior coroner speaking at their inquest in Solihull. 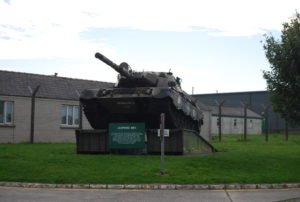 Corporals Matthew Hatfield and Darren Neilson, of the Royal Tank Regiment, were fatally injured while on a training exercise at the Castlemartin ranges in Pembrokeshire on 14 June 2017.

The coroner, Louise Hunt, said the “main cause” was that the gun could be fired when a key component – the bolt vent axial (BVA) – which forms an air-tight seal blocking hot gases escaping into the crew turret, was missing.

The coroner added that there were other issues which contributed to the explosion.

Louise Hunt, senior coroner for Birmingham and Solihull commented: “At the time of the incident, there was no written process in place to check for the presence of the BVA assembly or any written process to confirm when it should be removed and where it should be stored.

“The ‘prove the gun’ drill was misunderstood and there was a grey area around when it should be done. The decision to undertake an experience shoot was opportunistic and not communicated adequately. Furthermore, there was no written handover procedure in place, and no handover occurred between the crews.”

Cpl Neilson, 31, a father-of-one from Preston, Lancashire, was the tank commander and was thrown from the turret during the blast, while Cpl Hatfield, 27, and also a father, from Amesbury, Wiltshire, was loading ammunition.

Both men were evacuated from the scene but later died of their injuries. Two other soldiers, Warrant Officer Stuart Lawson and Trooper Michael Warren, were also injured but survived.

After the inquest, Cpl Neilson’s widow, Jemma Neilson, said health and safety should have been “world class” and called for immediate changes by the MoD and Army.

She said: “No soldier should ever be killed in training.

“Lessons must be learned, cultures must change and the MoD must accept failings and implement change immediately. An incident of this nature must never happen again.”

The Army told the coroner it has tightened training and drills since the tank explosion.

A report to prevent future deaths has been sent to the Ministry of Defence and BAE Systems, which designed and manufactured the Army’s main battle tank.

Discover how you can advertise with us
Castlemartin soldier deaths: Undetected ‘design flaw’ responsible Two soldiers died after a tank exploded because “a design flaw went undetected” on the vehicle's gun barrel, according to a senior coroner speaking at their inquest in Solihull.
Alison Fava
SHP - Health and Safety News, Legislation, PPE, CPD and Resources

The veterans who became safety and health leaders