The HSE has begun a joint investigation with police following a rollercoaster crash at M&D’s theme park, on the Motherwell side of Strathclyde Park, in North Lanarkshire on Sunday, which left nine people injured. 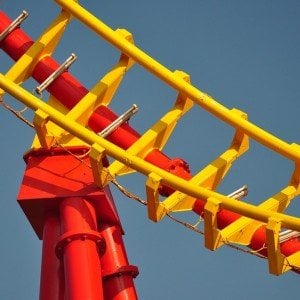 Two boys who were among the injured remain in a serious condition – the 12-year-old has chest, abdominal and leg injuries and the 11-year-old suffered serious arm and hand injuries, the BBC has reported.

Police have said that four other boys, a 14-year-old girl and a 19-year-old man, are all stable in hospital. A 19-year-old woman was released after treatment.

The crash happened after five gondolas on the Tsunami inverted rollercoaster detached from their rails at a bend and fell to the ground, police have said.

HSE principal inspector Barry Baker said investigations had begun: “Our thoughts are with the children and adults who have been injured in this incident and I must give praise to the emergency services and members of the public who came to their aid so quickly yesterday,” he said.

“We have brought HSE specialists in mechanical engineering to the site this morning, to begin the process of finding out what caused the gondolas to come off the rails.

“HSE will work very closely with colleagues in the police as the investigation unfolds.”

Det Insp John Malcolm said police wanted to speak to anyone who had witnessed the crash at 15:37 BST on Sunday 26 June.

“This is a really serious incident that has affected many people visiting the theme park and our thoughts go out to those who have been injured,” he said.

“We have now launched a joint investigation with the Health and Safety Executive (HSE) and our priority is to find out the cause of the incident.

“I would ask that anyone who witnessed the incident or indeed, anyone who may have video footage or photographs to get in touch with the dedicated inquiry team.”

The park’s director, Douglas Taylor, said: “Each and every ride within the theme park is safety checked on a daily basis and undergoes a thorough independent inspection every 12 months.

“My brother Matthew and I have been in business together for 50 years and this is the first incident of this type that we have ever been involved in.

“We are devastated as both a family and a business, and our heart goes out to everyone who has been affected by this accident.”

Mr Taylor added that: “We are cooperating fully with the joint HSE and Police Scotland investigation.

“It would be inappropriate to speculate on the cause of the accident until the investigation is complete.”

According to reports from the BBC, it is not the first time the park has experienced problems with its rides, including the Tsunami.

In July 2011, nine people were rescued from the park’s Tsunami rollercoaster after being trapped for up to eight hours. The malfunction was blamed on a broken lift chain.

Discover how you can advertise with us
Two children in ‘serious’ condition following rollercoaster crash The HSE has begun a joint investigation with police following a rollercoaster crash at M&D’s theme park, on the Motherwell
Lauren Applebey
SHP - Health and Safety News, Legislation, PPE, CPD and Resources

Our heart goes out to everyone who has been affected by this horrofic accident. I hope that bothe HSE and the Police will share the outcomes of the investigations and lessons to be learn out of this and take into account that should this happen again it could ge fatal

The comment made that daily safety check are completed on each and every ride, is what would be expected to be completed by employees. However where commented that through inspections only being completed every 12 months, does this sound a little inadequate when considering that lifting equipment that are lifting people under ‘Lifting Operations and Lifting Equipment Regulations’ require thought inspections to be completed every 6 months. I can sort of understand that the a ride/roller coaster may not be considered lifting equipment, however I’m sure that the riders carriages need to be rises to height for the carriages to… Read more »