RoSPA mourns the passing of HRH The Duke of Edinburgh 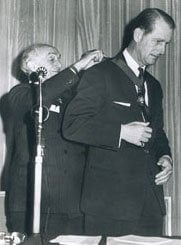 Duke of Edinburgh being invested as President of RoSPA in 1965.

Baroness Jolly, President of the Royal Society for the Prevention of Accidents (RoSPA), said: “We are deeply saddened by the death of His Royal Highness The Duke of Edinburgh, and extend our sympathies to Her Majesty The Queen and the Royal Family.

“Following his presidency of RoSPA’s World Congress on the Prevention of Occupational Accidents and Diseases in 1964, Prince Philip became President of RoSPA in 1965, a post he held until 1968. He was a tremendous ambassador for industrial safety, urging employers to increase their accident prevention activities and highlighting the individual tragedies that industrial accidents and diseases can bring to ordinary families.

In 1966, RoSPA celebrated its Golden Jubilee, with Her Majesty and Prince Philip visiting the Society’s Golden Jubilee Transportable Exhibition. This was also the year in which HRH Princess Anne passed her cycling proficiency test, along with more than 150,000 other children.

During the time of Prince Philip’s presidency, RoSPA ran its biggest-ever campaign – Stop Accidents Year in 1967 – during which deaths from accidents fell by 1,500. There was also success in some of RoSPA’s other campaigns during the time Prince Philip was President – drink-drive legislation was introduced and a three-year daylight saving experiment began, which was found to have saved around 2,500 deaths and serious injuries each year of the trial period.

RoSPA mourns the passing of HRH The Duke of Edinburgh Prince Philip was President of RoSPA from 1965 to 1968.
Safety & Health Practitioner
SHP - Health and Safety News, Legislation, PPE, CPD and Resources