Explosions were seen from Tata Steel plant in Port Talbot in the early hours of 26 April following a liquid iron spillage. 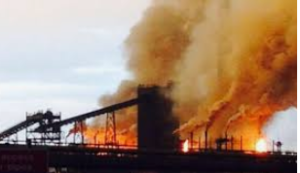 Tata Steel has confirmed that two employees were injured on its Port Talbot side on Friday morning. Residents were reportedly woken to their house shaking from an explosion. Local eyewitnesses said that they saw fire coming from the steel plant followed by a ‘large mushroom explosion’. Paramedics and firefighters were called to the scene at 3:33am.

The fire and explosion happened when a train carrying molten metal to the plant derailed, leading to the hot metal coming into contact with cold water on the track. South Wales Police and Tata steel plant confirmed that “two of [its] employees were slightly injured when there was a spillage of liquid iron while it was traveling to the steel plant. All fires have now been extinguished and a full investigation has begun”.

We can confirm two of our employees were slightly injured when there was a spillage of liquid iron while it was travelling to the steel plant. All fires have now been extinguished. A full investigation has begun.

The company later tweeted to say that the site had re-opened. It also thanked its colleagues from Welsh Ambulance, South Wales Fire and Rescue and South Wales Police for their support in helping us to deal with the incident.

On Saturday, a statement was released to say that two blast furnaces on the site had been restarted and staff were praised for their professionalism. The company also confirmed that supply to customers had been unaffected by the incident.

Following yesterday’s incident at #porttalbot steelworks, ironmaking operations have resumed with today’s restart of #BlastFurnace5. BF4 is expected to restart later today. Apologies to local residents who may witness noise & steam emissions which are normal part of BF restarts

Tata Steel has a total of 4,000 employees and in 2006, it was fined £500,000 after an employee died from fatal burns when molten metal spilled on him. In recent years, 2018, Tata was also fined £450,000 after breaching safety regulations resulting to an employee falling in an open pit.