Building in Stevenage collapses onto street

Swingate House, a derelict building currently under demolition in Stevenage, Hertfordshire, has collapsed onto the pavement. 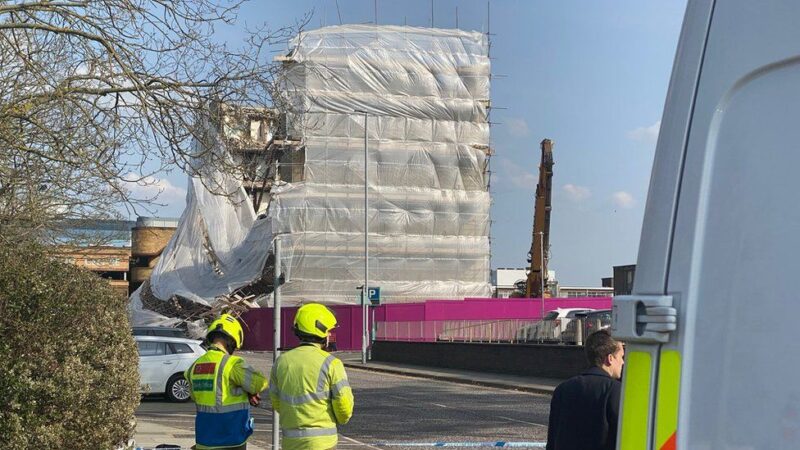 The building, which was being demolished as part of the Stevenage town regeneration project, collapsed at around 10:00 GMT this morning (Tuesday 22 March), roads in the town centre and around the building were immediately closed so that emergency services and contractors could deal with the clear-up.

Herts Fire and Rescue Service said it was investigating the cause of the collapse and was not aware of any casualties.

Andy Hall, Herts Fire and Rescue Service, told the BBC: “We’re currently assessing with partners from Stevenage Borough Council about the stability of the building, we’ve got structural engineers on site.”

He also said a plan was being put in place as to how the building would be demolished safely over the next few days.

A council spokeswoman claimed the building had been empty for some time, but that rescue dogs and thermal imaging were used to check no-one had been inside, and it was monitoring the situation.

Council Leader, Sharon Taylor, told the BBC that the borough’s development partner Mace had contracted Kane Group to carry out the work, both firms along with the fire service have agreed the Health and Safety Executive (HSE), should carry out an investigation.

She commented: “Both teams have had senior teams on site today to carry out their own investigations.

“Clearly they’ll have to investigate why, at this stage of the demolition works, that has happened.

“I’m just glad no one was hurt because there were staff on site at the time.”

Stevenage Council have since published a Tweet, stating: “We are continuing to assess the situation at Swingate House and ask people to continue to stay away from this area.”

The agenda for the hugely anticipated Safety & Health Expo, and its four co-located shows, is available now!