Ian joined Informa (formerly UBM) in 2018 as the Editor of SHP. Ian studied journalism at university before spending seven years in online fantasy gaming. Prior to moving to Informa, Ian worked in business to business trade print media, in the automotive sector. He was Online Editor and then moved on to be the Editor of two publications aimed at independent automotive technicians and parts distributors.
January 18, 2019

Jurors have heard that “pilot error” was purely to blame for the crash in August 2015 which killed 11 people. 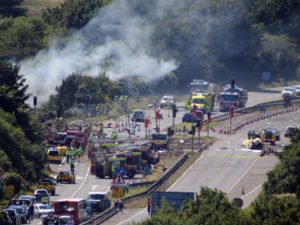 Andy Hill was performing aerobatics when his Hawker Hunter jet crashed on to the A27 in Sussex during the Shoreham Air Show, killing 11 men.

The cause of the crash has been put down to pilot error, the Mr Hill denies 11 counts of manslaughter by gross negligence.

Mr Hill is said to have carried out the manoeuvre at less than maximum thrust. On publication of the report into the disaster, AAIB principal inspector Julian Firth said: “The aircraft crashed because at the top of its aerobatic manoeuvre it was too low to complete it.”

Tom Kark QC said the jet was: “probably by as much as a 1,000ft below the height required” at the top of its loop, but that Mr Hill continued the manoeuvre nevertheless.

Jurors at the Old Bailey were told the aircraft, which was in “excellent working order”, “disintegrated” upon impact, creating a “massive fireball” and that Mr Hill, although an experienced pilot, was a know risk taker.

The 54-year-old had been flying at an air show in the past when it had to be stopped due to his “dangerous flying”, the court heard.

A trained Royal Air Force instructor and fast jet pilot, Mr Hill was seriously injured in the crash, which saw him thrown clear of the aircraft. He was initially placed in a medically induced coma and was interviewed by police following his discharge from hospital. He has since made a full recovery.

The trial is on-going and is expected to last up to seven weeks.

Discover how you can advertise with us
Shoreham air crash: “Serious negligence” from pilot led to the crash Andy Hill was performing aerobatics when his Hawker Hunter jet crashed on to the A27 in Sussex during the Shoreham Air Show, killing 11 men.
Ian Hart
SHP - Health and Safety News, Legislation, PPE, CPD and Resources