The health and safety watchdog has ordered bosses at a Glasgow hospital to make improvements. 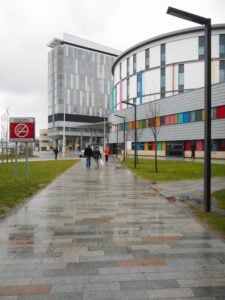 Greater Glasgow health board has received an improvement notice from the HSE, stating that the Queen Elizabeth University Hospital has failed to ensure the ventilation system within a ward is suitable.

The notice relates to the ventilation system within Ward 4C of the hospital and goes on to say that the hospital failed to ensure there is “suitable and sufficient to ensure that high risk patients who are vulnerable to infection are protected from exposure to potentially harmful airborne microbiological organisms”.

As a result, the hospital will now be required to carry out a verification of the ventilation system by 31 March 2020.

NHS GGC Chief Executive Jane Grant said: “We are sorry for the distress that patients and their families have experienced by the current issues and want to assure them and the public that we are working with the Scottish government to do everything necessary to remedy the situation.

“Patients who require specialist ventilation are cared for in Ward 4B which is a fully HEPA-filtered ward,” She continued.

“As a further precaution we introduced mobile HEPA filters in Ward 4C in January as part of our control measures when we were investigating infections at that time.

“We welcome the opportunity to discuss these actions with the Health and Safety Executive when we meet them in the new year.”

The improvement notice comes after NHS GGC was escalated to stage four of the NHS Board Performance Framework by Health Secretary Jeane Freeman – the second highest level of Scottish government intervention – in November following its response to infection control.

Concerns about the water supply at the hospital were raised after it emerged 10-year-old cancer patient Milly Main died after contracting an infection in August 2017.

Last month, the health board instructed legal action against Brookfield Multiplex, a contractor involved in the construction of the hospital.

A Scottish government spokeswoman said: “We are aware that NHS Greater Glasgow and Clyde has received a notification of contravention letter and an improvement notice from the Health and Safety Executive.

“We have been clear that we expect the board to address any identified breaches as a matter of urgency and provide detailed evidence to demonstrate that remedial action has been taken.”

Hospital ward ventilation system ‘broke health and safety law’ Greater Glasgow health board has received an improvement notice from the HSE, stating that the Queen Elizabeth University Hospital has failed to ensure the ventilation system within a ward is suitable.
Barbour EHS
SHP - Health and Safety News, Legislation, PPE, CPD and Resources