It’s simply wrong that outsourcing giants are making a profit from taxpayer’s money, off the backs of hardworking hospital staff, says GMB London 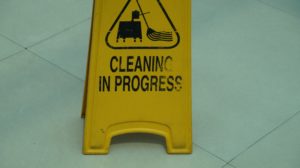 Protests have taken place outside Chelsea and Westminster and Homerton hospitals after it emerged that ISS staff at the London hospitals are not given paid sick pay for the first three days of illness, meaning staff are forced to work even when they are ill.

The firm also reportedly refuses to pay anything other than government minimum of £94.25/week (£3.43/hr for full-time workers) to staff who’ve worked in the hospital for years.

Low paid GMB members working for facility services company ISS say: ‘all they want for want for Christmas is to be back in-house’.

On Tuesday 17 December, GMB members will be joined by the Mayor of Hackney, Civil Society Leaders and supporters to deliver a Christmas Card signed by over 100 members of staff across the Trust, who have a combined 2,000 years of service, asking the CEO to intervene and bring them back ‘in-house’.

An ISS spokesperson told SHP: “ISS is disappointed that the Trade Union would use the run up to Christmas to make an issue of arrangements that have remained unchanged for many years. The terms and conditions enjoyed by ISS employees are at least comparable to those in the commercial sector, and are those agreed with our public sector clients.”

Having worked in the NHS I can well believe contract staff are so badly treated, and ‘presenteeism’ isn’t just bad for the workers, it’s very bad for patients.

I agree, too many “ill people” in hospitals already, do we really want more….. It will and DOES cause additional deaths but I guess these numbers will go under the radar…. 🙁