No action needed after worker crushed by falling cabin

Health and safety chiefs have recommended no further action after a probe into an industrial accident on the A9 near Perth. 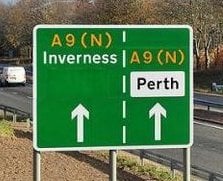 A construction worker was crushed under a falling cabin during preparation work for the Scottish Government’s dualling scheme at Bankfoot. The 45-year-old suffered serious injuries in the accident at the Balfour Beatty site in January.

The HSE recently confirmed it had finished investigating the circumstances of the accident.

A Transport Scotland spokesman said: “Our contractor for the A9 Dualling: Luncarty to Birnam project, Balfour Beatty, has confirmed that an HSE investigation for the incident which occurred on site on January 7 has concluded with no further action required.”

He said: “Transport Scotland and its contractors place the utmost importance on protecting the safety of the local community, road users and operatives.”

According to reports, a source with knowledge of the accident said the employee was working with others to set up cabins at the temporary construction village near Bankfoot. The cabin was being moved into position by a crane when the machinery malfunctioned and dropped the unit on to the worker.

Emergency services attended and the man was rushed to hospital.

It is understood he made good recovery, after receiving specialist treatment at a private hospital in Manchester, however Transport Scotland said it could not comment on his status.

Balfour Beatty deferred all enquiries about the investigation to Transport Scotland.

The accident happened as the company was setting up its base for work on the next stage of the £3 billion dualling project. The work involved a new bridge at the Stanley/Tullybelton junction, to the north of Perth.

Fifteen concrete beams, weighing between 49 and 57 tonnes, were swung into place over the carriageway during a series of overnight closures.

Earlier this year, Transport Secretary Michael Matheson visited the site to check out construction on the £96 million phase and meet staff and trainees.

He said: “As Scotland’s largest infrastructure project, the A9 dualling programme offers a once-in-a-lifetime opportunity to create a legacy the industry can be proud of.”

Discover how you can advertise with us
No action needed after worker crushed by falling cabin Health and safety chiefs have recommended no further action after a probe into an industrial accident on the A9 near Perth.
Alison Fava
SHP - Health and Safety News, Legislation, PPE, CPD and Resources