Ian joined Informa (formerly UBM) in 2018 as the Editor of SHP. Ian studied journalism at university before spending seven years in online fantasy gaming. Prior to moving to Informa, Ian worked in business to business trade print media, in the automotive sector. He was Online Editor and then moved on to be the Editor of two publications aimed at independent automotive technicians and parts distributors.
September 28, 2018 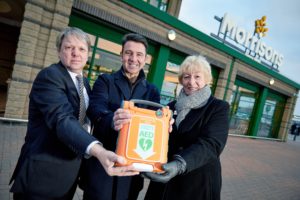 St John Ambulance has awarded Morrisons an Everyday Heroes award after the supermarket chain installed life-saving defibrillators in nearly 500 of its stores.

Morrisons Foundation, the retailer’s charitable arm which provided £500,000 of funding, said at least five lives had been saved since the initiative began a year ago.

The annual awards, ran by first aid charity St John Ambulance, celebrate those who stepped forward when it mattered most to help people with first aid, to support communities and have a positive impact on health.

Defibrillators, also known as AEDs, can dramatically improve the chances of a patient surviving a cardiac arrest, when combined with cardiopulmonary resuscitation (CPR).

A Morrisons store in Blackburn is among the 494 to install a defibrillator and one of the five stores where a life has already been saved. When a customer suffered a cardiac arrest and collapsed in an aisle, the store first aider and her team were able to resuscitate him thanks to the sophisticated machine, which gives shocks to the heart to restart it.

As part of the initiative, Morrisons also arranged for more than 2,300 employees to attend sessions on how to use defibrillators and give CPR run by St John Ambulance volunteers.

Gary Mills, Group Retail Director of Morrisons, said: “We hope it’s reassuring for customers, colleagues and the local community to know that we have defibrillators in Morrisons. We have staff trained in first aid and CPR but a defibrillator boosts a person’s chances of survival in the event of a cardiac arrest so we’re pleased to have them in our stores.”

Discover how you can advertise with us
Morrisons recognised for defibrillator installation Supermarket named St John Ambulance Workplace Hero after installing £500,000 worth of defibrillators in 494 stores.
Ian Hart
SHP - Health and Safety News, Legislation, PPE, CPD and Resources

‘Every second counts when someone suffers a cardiac arrest’

Keep your people safe with a defibrillator from the BHF