Meeting sought with UK contractors in Qatar to “stop exploitation” 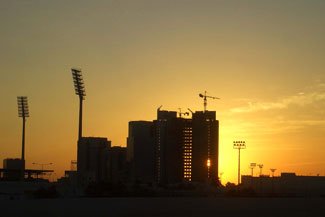 The GMB has contacted the chief executives of 13 UK-based contractors with contracts in Qatar to build stadiums and other infrastructure leading up to the 2022 World Cup, seeking a meeting over the exploitation of migrant workers in the gulf state.
Bert Schouwenburg, the union’s international officer, has written an open letter to the CEO’s of Balfour Beatty, Carillion, Laing O’Rourke, Interserve, Kier Group, Vinci, Galliford Try (Qatar), ISG Middle East, Amey, Mace, Bouygues UK, BAM and Costain to request a meeting.
In the letter sent on 22 October, Schouwenburg said: “In the world’s richest country per head of population, migrants are paid as little as £5 per day for 15 hours of work in ferocious heat. On-site injuries and fatalities are commonplace and it has been estimated that, at the current level of accidents, some 4,000 workers will die before a ball is kicked in nine years’ time.”
He added that the GMB is an affiliate of the International Trade Union Confederation and supports their campaign to prevent the World Cup from taking place in Qatar unless there is dramatic improvement in workers’ rights.
This letter comes after the Guardian exposé of Qatar’s industrial relations environment, which raised questions about Qatar’s preparations to host the World Cup and prompted David Cameron’s comment on BBC Radio 5 Live praising the British construction industry’s health and safety record in the preparation of the 2012 London Olympic games — covered in SHP earlier this month.
Schouwenberg said: “UK companies have a particular responsibility to ensure that their Qatar-based employees, regardless of their nationality, and their sub-contractors employees’ enjoy terms and conditions within globally accepted standards of ‘decent work’ as laid down by organisations such as the International Labour Organisation.”
He added: “The clear message from 10 Downing Street is that your companies have a responsibility to maintain those standards [set during the preparation for the 2012 Olympic games] in Doha and there is no reason for that not to happen. As major players in international construction, you are well placed to make an important contribution and lead the way for change.”

Discover how you can advertise with us
Meeting sought with UK contractors in Qatar to “stop exploitation”
Safety & Health Practitioner
SHP - Health and Safety News, Legislation, PPE, CPD and Resources

You could also include similar exploitation in Africa and Asia and any where else where international law and clever interpretation by company Lawyers permits such anashamed abuse.

But no doubt the share holders are happy enough, surely this is what a free market economy is all about?

I built a Hindu Temple in Nth London back in the 90`s and labour from India was treated appallingly and that was in the UK. And one of the above was PC.

Icons of Industry, I question that judgement?

It would appear that “excellence” out ways anything uncreditable.

Shocking really when you consider it at face value?

Shame David Cameron wasn’t on board with safety before he had the chance to boast British success based on the Olympics. I work in Qatar as a safety professional trying hard to change safety standards and culture, it didn’t help when the British PM wanted to “kill off health and safety culture for good” why are they going to listen to him now? I also work in Africa and have to agree with Bob Kennedy. Safety first? or exploitation for cash opportunity?

David Cameron personifies hypocrisy when it comes to H&S.