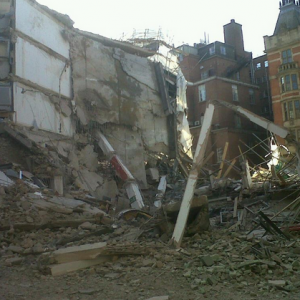 The London Fire Brigade was called to the site in Portugal Street, Holborn when part of the building and its surrounding scaffolding collapsed injuring a demolition worker.

The 56-year-old man was taken to hospital with injuries to his head and hip after part of the building collapsed at about 16.15 BST

About 200 people were evacuated from nearby properties and the building site, and hazard response teams attended the scene.

The building was being demolished at the time of its collapse, the London Fire Brigade said.

It added that the building had collapsed in on itself, rather than onto the streets below.

Station Manager John Snelgrove, who was at the scene, said: “When the first crews arrived they found the building, which was under refurbishment, had collapsed between the fifth and second floors.

“Firefighters gave first aid to an injured man on site until ambulance crews arrived and also helped police put safety cordons in place and to evacuate people from the immediate area.”

The collapse of the upper floors brought down demolition machinery and tonnes of rubble causing the lower floors to give way. 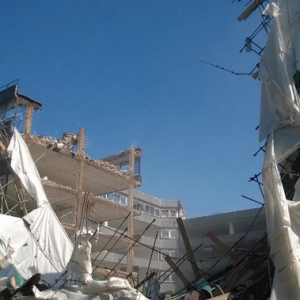 Eye witnesses said most of the construction team had been on a break on a different part of the site when the building came down.

Eyewitness Murat Akkulak, a research co-ordinator at the Royal College of Surgeons, said the building was being demolished “layer by layer”.

He said: “There was a lot of dust but I could see there was a digger down amongst the rubble and one or two builders were running around trying to get someone out of the digger.

“The operator seemed to be trapped in the digger. When I checked the photos I had taken I saw there were two people standing on the upper layer looking down. They seem to have had a really lucky escape to me, because everything else had just collapsed around them.” 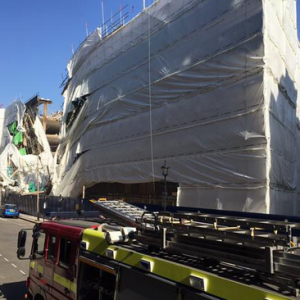 The site is being demolished by specialist Keltbray.

Paul Deacy, Managing Director of Keltbray Demolition & Civil Engineering said: “We can confirm there has been an incident at Portugal Street, where Keltbray was working on the demolition of a building when part of the building and scaffolding collapsed.

“One man has been taken to hospital with non-life threatening injuries. Fortunately nobody else was hurt.

“Emergency services were immediately called to the scene and all people in the vicinity were evacuated.

“All operations on site have been suspended while we work with all the relevant authorities to investigate and fully understand the circumstances of the incident.”

The Health and Safety Executive has been informed.