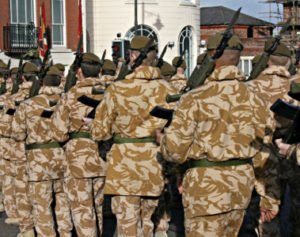 Tory MP and former army officer Johnny Mercer said soldiers are living in barracks that are not fit for animals.

Defence Safety Authority (DSA) inspectors found that financial cuts had led to an “unacceptable degradation” of barracks, said the report, which was obtained by the Sun.

The DSA’s annual report revealed that 373 fires have been reported across properties owned by the army, navy or air force in 2017-18. Referring to the leaked report’s findings it noted “the apparent disinvestment or lack of priority afforded to fire safety across our infrastructure is being mirrored in the ambivalence of the very people it is there to protect.”

Until “major weaknesses” are remedied there remained a strong likelihood of a fire resulting in “significant loss of life, loss of capability and damage to the MoD’s reputation”.

Problems cited by the report include faulty equipment and “broken or unserviceable infrastructure”.

Mercer, also a member of the Commons Defence Committee, told the Sun: “Animals would not be housed in such dangerous conditions. It is disgraceful how ministers talk up our armed forces at every opportunity, and yet, away from the spotlight, ask our most loyal public servants to endure totally unacceptable and lethal living environments.”

The Ministry of Defence (MoD) said all its buildings complied with fire regulations and £4bn was being invested into modernising barracks.

“All occupied buildings owned by the MoD meet national building and fire regulations and we regularly inspect our sites to ensure they meet safety standards,” said an MoD spokesman. “We are making improvements to fire safety across our sites, including bolstering our resources for fire assurance.”

Fire safety checks across England have fallen by 42% since 2010, according to the new watchdog for fire and rescue services.

Fire service protection teams have not been given sufficient resources to do their work, according to the report.

“The consequences of long-term under-investment in this critical area are too often evident,” it adds.

A legal expert on construction and infrastructure has warned that the political vacuum in Stormont means Northern Ireland could miss out on regulatory changes being ordered by the UK government in the wake of Grenfell.

Northern Ireland is officially without a devolved government after power-sharing collapsed two years ago.

Writing in The Irish News, Pinsent Masons senior associate Ciaran McNamara said noted that “the use of combustible materials on external walls of high-rise buildings that contain flats, as well as hospitals, residential care premises and student accommodation above 18 metres in height will be banned in England and Wales.

“As well as applying to new buildings, the ban will also apply where there is a ‘material change of use’ of an existing building bringing which brings it into scope.

This means that where an existing building over 18 metres in height is being changed to become residential or institutional accommodation, any material which does not achieve the required European classifications would need to be removed.

“The ban comes into effect by way of the existing Building Regulations frameworks in those jurisdictions. However, as this is a devolved matter for the NI Assembly and the Department of Finance and in the absence of any apparent will to introduce legislation via direct rule these changes will not apply to Northern Ireland.”

Read his full article in the Irish News

This article was first published on our sister site, IFSEC Global.