Ian joined Informa (formerly UBM) in 2018 as the Editor of SHP. Ian studied journalism at university before spending seven years in online fantasy gaming. Prior to moving to Informa, Ian worked in business to business trade print media, in the automotive sector. He was Online Editor and then moved on to be the Editor of two publications aimed at independent automotive technicians and parts distributors.
July 6, 2022

The health secretary has resigned from government, saying he no longer has confidence in Prime Minister Boris Johnson to lead the country. Sajid Javid was the first of several ministers, including Chancellor Rishi Sunak, to leave their post on Tuesday evening.

The resignations followed an apology from PM for the appointment of MP Chris Pincher to a government role. Mr Johnson admitted he had made a “bad mistake” in appointing Mr Pincher to the role of deputy chief whip earlier this year, despite being made aware of earlier allegations about the MP’s conduct.

In a letter of resignation to the Prime Minister, Mr Javid wrote: “It is with enormous regret that I must tell you that I can no longer, in good conscience, continue serving in this Government, I am instinctively a team player but the British people also rightly expect integrity from their Government.

“The tone you set as leader, and the values you represent, reflect on your colleagues, your party, and ultimately the country. Conservatives at their best are seen as hard-headed decision-makers, guided by strong values. We may not always have been popular, but we have been competent in acting in the national interest. Sadly, in the current circumstances, the public are concluding that we are neither.

“The vote of confidence last month showed that a large number of our colleagues agree. It was a moment for humility, grip and new direction. I regret to say, however, that it is clear to me that this situation will not change under your leadership – and you have therefore lost my confidence too.”

The letter opened by saying, “I have given every ounce of energy to this task, and am incredibly proud of what we have achieved.”

Mr Javid went on to reference the challenge of living with COVID-19, but highlighted the work done around the rollout of the vaccine booster programme and the ‘important strides’ in the recovery and modernisation of the NHS and adult social care.

He concluded by thanking ministerial and departmental colleagues and his admiration for NHS and social care staff. 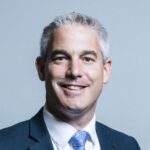 On being appointed to replace Mr Javid, Steve Barclay said: “It is an honour to take up the position of Health and Social Care Secretary.

“Our NHS and social care staff have showed us time and again – throughout the pandemic and beyond – what it means to work with compassion and dedication to transform lives.

“This government is investing more than ever before in our NHS and care services to beat the COVID backlogs, recruit 50,000 more nurses, reform social care and ensure patients across the country can access the care they need.”