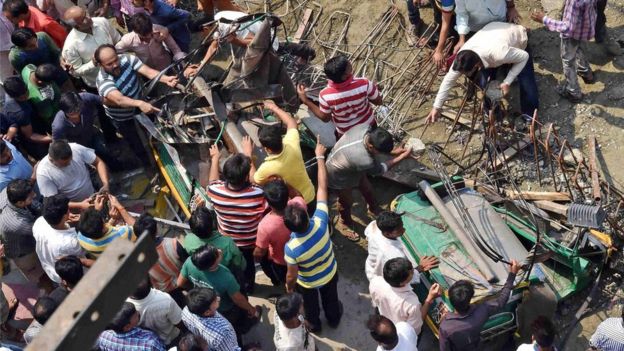 Dozens of people are still believed to be trapped after a flyover collapsed in the Indian city of Kolkata (Calcutta) on Thursday night.

At least 23 people were killed when the 2km long bypass, which had been under construction since 2009, collapsed suddenly.

Rescue workers have been trying to reach those people still believed to be under the collapsed flyover, with at least 90 people said to have been rescued already.

Police chief Ajay Tyagi told Reuters news agency: “Many of the people rescued have been seriously injured. Many could still be buried below the debris.”

The cause of the collapse is not immediately clear. Injured construction worker, Milan Sheikh, told the AFP news agency he had been working on the structure before it collapsed and had seen bolts starting to come out of the structure.

“We were cementing two iron girders for the pillars,” he said. “But they couldn’t take the weight of the cement.

“The bolts started coming out this morning and then the flyover came crashing down.”

A senior official of IVRCL, the company in charge of the construction, told a news conference that the collapse had been an “act of god”, adding that the company had a good safety record and that it was co-operating with investigators.

Discover how you can advertise with us
Dozens trapped after fatal flyover collapse in Kolkata Dozens of people are still believed to be trapped after a flyover collapsed in the Indian city of Kolkata (Calcutta)
Roz Sanderson
SHP - Health and Safety News, Legislation, PPE, CPD and Resources

Have seen similar construction in China, first things to remeber are the people who have died and thoughts and support to those involved in the rescue mission like the power station in england. This shows that things happen like this all over the world, wait for the results of any enquiry before casting blame.