Didcot power station collapse: Concerns expressed over lack of conclusion to the investigation

Campaigners have joined families of four victims to express concern about a lack of conclusion to an investigation into the collapse of Didcot Power Station boiler house, on 23 February 2016. 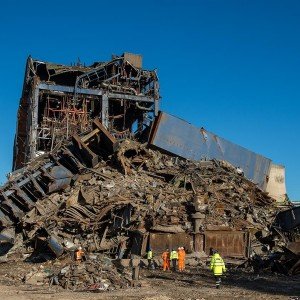 Experienced demolition workers, Mick Collings, Chris Huxtable, Ken Cresswell, and John Shaw were employed by Coleman’s to demolish Didcot Power station for RWE. They were preparing a boiler house for demolition when it collapsed upon them, burying them under tonnes of rubble.

The body of Mick Collings was found on the day of the incident, but Chris Huxtable, Ken Cresswell and John Shaw were not found until more than six months after the collapse, as the remaining structure had to be safely demolished before recovery could be attempted.

In July 2021, the Editor of Demolition World, Mark Anthony, told the BBC that “the entire world is watching” to learn lessons. But, almost a year on, there is still no conclusion to the investigation.

Families Against Corporate Killers (FACK), said in statement that it is ‘concerned that no conclusion has been reached after six years of investigation by the Police, HSE and CPS under the Joint Protocol on Work-Related death, and no time frame for any conclusion has been given.

‘The violence of the deaths and the agonising time taken to recover the bodies of the three men they loved – partners, husbands, fathers – has been incredibly traumatising and added to the grief of all the families concerned.

‘FACK has supported the families of Chris Huxtable, Ken Cresswell, and John Shaw. We pay tribute to their steadfast concern to get their men out, to find out what happened, why they died, to bear witness to their lives however painful and traumatic that has been, and to try to ensure this never happens to other workers and families.

Gail Cresswell, Ken’s wife told the BBC this week that the lack of progress in the Thames Valley Police-led probe has been “shocking” and “really hard” to endure.

“I just want to say how appalled we are at the wait. Six years without answers for our men who just went to work and also for all the men still working in this industry that need answers too, so no other families go through this dreadful nightmare like us,” Gail continued in the FACK statement.

Hilda Palmer, Facilitator of FACK said: “FACK’s concern is that the families need answers to their questions, how and why their loved ones, experienced demolition workers, died; lessons need to be learned to ensure the safety of workers involved in the future demolition of hundreds of other old power stations in UK and across the world; and anyone bearing responsibility needs to be held to account. The longer this goes on the harder it is for the families, other demolition workers are at risk, and it becomes less likely that any justice will be delivered.

“Both FACK and the families are well aware of the difficulties due to the uniqueness and complexity of the investigation. Thousands of tonnes of rubble had to be recovered, transported, examined and analysed; plans, designs, risk assessments, systems of work and supervision had to be scrutinised; thousands of photographs and documents had to be collected and catalogued and hundreds of people interviewed. We know that ground-breaking information systems and software have been developed to manage the data, to generate animated reconstructions, and many experts had to be commissioned to report on all aspects of the demolition and collapse. We are very well aware of the enormous amount of resources that have gone into this investigation, and we all appreciate the work carried out by the Health and Safety Executive, HSE, and Crown Prosecution Service, CPS, the regular meetings to keep the families updated but also need for confidentiality to ensure the integrity of any future prosecutions, and we share the desire for the most rigorous investigation possible.  We commend the HSE and TVP but after six years we are entitled to ask how much longer?

In Spring 2019 the families were told that an end was in sight as to a decision about whether there would be any prosecutions for Corporate Manslaughter or Gross Negligence Manslaughter or whether the primacy for the investigation would be handed to the HSE to consider any prosecutions under health and safety law. But this hope was dashed months later, and now the annual reports feel the same as years ago, giving no hint as to exact state of the investigation, and making clear there is no possible time frame for any decision as to prosecutions.

Ken Cresswell’s youngest daughter Sadie said: “Ken is a very much missed, much loved dad, husband and grandad and we won’t stop until we get justice even though we are disappointed that it’s hit the six-year mark and we feel like we are still at square one. The investigation team ask us to trust they are doing the right thing and us as a family hope they are. But we still feel the pain today as we did when we found out our hardworking man was missing on that dreadful day back in 2016 after the boiler house collapsed.”

Tia Huxtable, daughter of Chris Huxtable, said: “We are deeply appalled that after six years we still have no answers why my loving dad went to work on that fateful day and never returned home to us. They took away not just a father but my best friend too. I hope and pray every single day that they get the answers so that no other families go through what we have been through. We think of my dad every single day and he is talked about constantly. To some he is a nobody but to us he was a dad, partner, brother-in-law and uncle, and a cherished one too. Since it happened, the days aren’t getting easier knowing there’s no answers on why the building collapsed as it did and why my dad lost his life. We all need justice.”

Hilda Palmer called for action: “So after six years, FACK and the families now ask the CPS, TVP the HSE and the Government:

‘How much longer must the families wait? Are there sufficient resources available to conclude the investigation as speedily as possible? What is the precise state of the investigation and the timetable? What are the barriers to its completion? What lessons can the demolition industry learn now to protect other workers? When will the families of Mick Collings, Chris Huxtable, Ken Cresswell, and John Shaw get any justice?’

He said that the force remains “committed to this extremely complex and challenging investigation” and maintains “close contact” with the victims’ families.

“At this time, we cannot put a timeframe on when the investigation will conclude, however I would like to be very clear that we will not stop in our pursuit of answers for the families,” he added.

Discover how you can advertise with us
Didcot power station collapse: Concerns expressed over lack of conclusion to the investigation Campaigners have joined families of four victims to express concern about a lack of conclusion to an investigation into the collapse of Didcot Power Station boiler house, on 23 February 2016.
Safety & Health Practitioner
SHP - Health and Safety News, Legislation, PPE, CPD and Resources