Ian joined Informa (formerly UBM) in 2018 as the Editor of SHP. Ian studied journalism at university before spending seven years in online fantasy gaming. Prior to moving to Informa, Ian worked in business to business trade print media, in the automotive sector. He was Online Editor and then moved on to be the Editor of two publications aimed at independent automotive technicians and parts distributors.
March 23, 2022

Hammersmith and Fulham Council initially closed London’s Hammersmith Bridge in 2019 to all traffic, with pedestrians and cyclists still able to cross the Bridge from Barnes to Hammersmith. In 2020, the bridge was closed to all traffic after a heatwave was discovered to have caused further cracks.

The bridge reopened in 2021, and, in 2022, the government has vowed to invest further funding in its restoration to ensure the structure remains open. 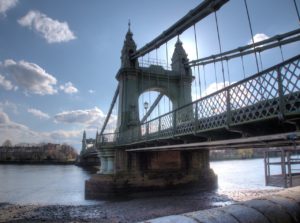 First constructed in 1824, the bridge was waiting to undergo refurbishment when it was closed in 2019 as ‘critical faults’ were discovered.

At the time, pedestrians and cyclists were still able to cross the bridge from Barnes to Hammersmith, but seven buses services were suspended.

The discovery of a heatwave causing further cracks meant that all traffic would be blocked from using the bridge and no boats would be allowed to pass underneath it.

In 2020, Hammersmith & Fulham Council leader. Cllr Stephen Cowan said: “Safety is the number one priority. I’m absolutely sure that we averted a catastrophe by closing this 19th century suspension bridge to motor vehicles last year.

“We have some of the best engineers in the world working on this scheme. They advise we now face a similar dilemma.

“I appreciate how inconvenient this will be to thousands of people on both sides of the river and I am sorry about that, but we must follow the engineers’ advice which is why the bridge will be closed with immediate effect today.

“We will update everyone as soon as engineers have investigated the scale of the recent damage. I have instructed them to find a plan to safely reopen it as quickly as they can.”

Hammersmith and Fulham Council stated that the 123-year-old bridge’s structure was never designed for modern traffic and high volumes of heavy vehicles such as buses and Government budget cuts meant that TFL has been unable to keep up the repairs, which are now estimated to cost in excess of £140m.

It was later reported that corrosion has been found on the bridge, which caused ‘hairline microfractures’, that can potentially become bigger cracks on the bridge’s footing, if heavy pressure is applied on top of it. The bridge was expected to be closed to traffic for up to three years.

Buses were previously ordered by the council with a strict rule of only allowing one bus on the bridge at a time, but in 2016 Transport for London removed their bridge wardens, which were ensuring that this rule was enforced, leading to a breech of the agreement.

It was estimated that up to 16,000 people used the bridge every day, before the original closure.

After first closing in 2019, and re-opening in July 2021, ministers announced on 22 March 2022 that almost £3million will be injected into the project so it remains permanently open to pedestrians, cyclists and river traffic.

Previous government funding of £4million went towards immediate mitigation works to the structure, which involved blast cleaning and inspections to its pedestals, helping ensure there were no long-term risks to its reopening.

Transport Secretary, Grant Shapps, said: “I’m giving Londoners reassurance this government will do everything in its power to keep this vital, historic structure open.

“We’re investing into its restoration, ensuring local residents can continue to cross the river by foot or bike and I look forward to working further with the local council on future works to reopen the bridge to motorists.”

After over a year of delay, the government injected fresh impetus by setting up a special Hammersmith Bridge Taskforce in September 2020, bringing together all parties to discuss both long-term and temporary solutions.

The release of the recent funding, which amounts to £2.93million, comes after ministers approved the London Borough of Hammersmith and Fulham’s business case.

Pedestrians cyclists and river traffic will still be able to use the bridge throughout the duration of these works, with stabilisation expected to take less than a year to complete.

Discover how you can advertise with us
Hammersmith Bridge: Government funds £3million restoration works to ensure the structure ‘remains open’ The release of the recent funding, which amounts to £2.93million, comes after ministers approved the London Borough of Hammersmith and Fulham’s business case.
Ian Hart
SHP - Health and Safety News, Legislation, PPE, CPD and Resources