Pilot errors and ineffective measures to protect the public led to the deaths of 11 people, after a vintage jet crashed on to a dual carriageway at the Shoreham Airshow, during a rolling manoeuvre. 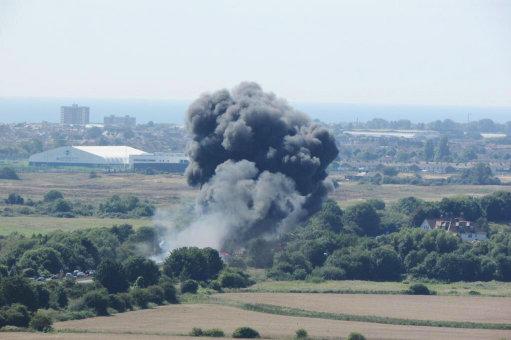 Former RAF pilot Andy Hill, who survived the crash, is said to have carried out the manoeuvre at less than maximum thrust.

On publication of the report into the disaster, AAIB principal inspector Julian Firth said: “The aircraft crashed because at the top of its aerobatic manoeuvre it was too low to complete it.”

It would have been possible to abort it safely at the apex of the loop but Mr Hill had not been trained in the escape manoeuvre which might have got him out of trouble, the report says.

Training and assessment procedures in place at the time of the accident did not prepare the pilot fully for the conduct of relevant escape manoeuvres in the Hunter.

The AAIB also found the severity of the outcome of the crash was due to “an absence of provisions to mitigate the effects of an aircraft crashing in an area outside the control of the organisers of the flying display”.

The report said the risk assessment “was not suitable and sufficient to manage the risks to the public”, and the Civil Aviation Authority (CAA) did not require to see or approve risk assessments before issuing a permission to hold a flying display.

The investigation identified the following causal factors in the accident:

The following contributory factors were identified:

To read the full report and to watch an animation to visualise the aircraft’s final manoeuvre click here.

Discover how you can advertise with us
Report: “Pilot errors led to Shoreham air crash” Pilot errors and ineffective measures to protect the public led to the deaths of 11 people, after a vintage jet
Lauren Applebey
SHP - Health and Safety News, Legislation, PPE, CPD and Resources