The Trust is named after the 25-year-old estate agent who disappeared in 1986 after going out to conduct a viewing in West London. The alarm that Suzy hadn’t been seen wasn’t raised until late in the day, and despite huge media coverage and police activity, Suzy was never found. 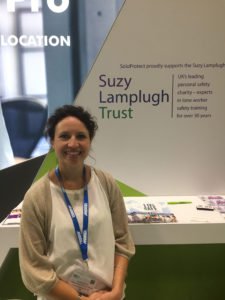 Garner told the Safety & Health Expo’s Lone Worker Theatre that often companies don’t even know that they are responsible for lone workers: “Sometimes people say to us ‘I didn’t think I had lone workers, we’re in an office’.

“But if you are out of sight, without contact with other people, you are a lone worker. Receptionists on the ground floor of an office block, for example, often work alone and are the first point of contact with clients and members of public coming in off the street.”

Lone workers are at risk of verbal abuse, insults and aggression from patents, clients, family members and staff, but also face a number of other dangers like fire hazards, pets, poor hygiene, stalking, knives and guns and unsafe physical environments, Garner added.

There are a number of steps that both employers and employees can take to embed a culture of personal safety, said Garner.

From an employer perspective, it is essential that staff are adequately trained, know what the risks might be and can look out for them. Employers also have a responsibility to investigate and report incidents, both to authorities like the police and HSE, and to other employees, so that they can adjust their expectations and react to clients and scenarios appropriately.

Most important is to have a plan and policy for lone working that everyone in the organisation is familiar with, so that when situations arise, everyone can act correctly.

“When we talk to employees, they often say they think there’s a policy but don’t know where it is. If nobody knows about the policy, it’s not going to work. If it doesn’t reflect the situation on the ground, nobody is going to feel like it relates to them.”

A policy created through open dialogue with employees will reflect reality and is more likely to result in buy-in from staff.

Making sure that lone workers feel safe in their roles is vital for keeping them safe, but also for protecting their wellbeing: “We know that if people aren’t feeling safe in their jobs they will perhaps start feeling stressed, won’t enjoy going into their jobs and won’t be as confident as they should be.” Discussion with workers can reveal what issues are causing stress. It could be a lack of dialogue with managers or dealing with aggravated clients. This, says Garner, should be part of any assessment.

To mark the 30th anniversary of Suzy’s disappearance in 1986, the Suzy Lamplugh Trust carried out a survey of the housing sector to assess how employees feel about the risk at work.

Reflecting on the results, Garner said: “We were dismayed to find that incidents of violence were still prevalent across so many sectors. We looked at these results and felt there was a need to bring together practical tips and developed Suzy’s Code for Personal Safety.”

This code provides seven simple steps for any lone working employer to put in place. “By following these steps we know where our colleagues are at any one time. When there have been security scares in London we have been able to know our employees are safe within minutes.”