Body cams for ambulance staff after rise in attacks

England’s ambulance trusts are expected to be given body cameras by the end of the month as assaults on ambulance workers rise by almost a third in five years. 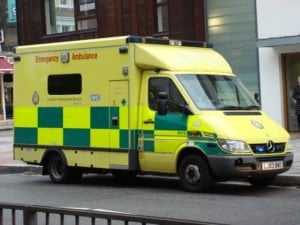 The NHS is expecting to make body-worn camera equipment available to all 10 of England’s ambulance trusts by the end of the month, following an increase in attacks on ambulance workers.

BBC News reported that more than 3,500 attacks on emergency care staff were recorded last year. In 2018, SHP reported that 465 ambulances and their paramedics were to be issued with body cameras as part of an initial pilot.

Police officers in Humber, parking wardens in Yorkshire and recycling workers in Oxfordshire have all been issued with body cameras in recent years to help ensure their safety.

Earlier this year a scheme, known as Operation Cavell, a London-wide operation was launched to convict those who assault NHS staff.

This latest move has been welcomed by staff trialling the cameras, some of whom had experienced violence on the job.

Chief People Officer for NHS England Prerana Isaar told the BBC: “Every member of our dedicated and hardworking NHS staff has the fundamental right to be safe at work and it is our priority to eliminate violence and abuse, which we will not tolerate.”

Following an announcement last year, anyone who assaults or attacks emergency workers could face longer jail terms, following the announcement of a consultation on doubling the maximum penalty for the offence.

NHS England said the camera would start recording at the touch of a button, if members of the public became aggressive or abusive. Recordings can then be shared with the police and used in court as evidence.

NHS England Medical Director Steve Powis, told the BBC: “Initial trial findings show the cameras make staff feel safer, and can assist in de-escalating situations where staff are faced with someone being aggressive towards them.”

REGISTER NOW
Body cams for ambulance staff after rise in attacks England’s ambulance trusts are expected to be given body cameras by the end of the month as assaults on ambulance workers rise by almost a third in five years.
Safety & Health Practitioner
SHP - Health and Safety News, Legislation, PPE, CPD and Resources

30 years ago Ambulance staff who were attacked on duty rarely got any significant support, or Police interest IF the service reported it, a close encounter with a 12″ carving knife wielded by a patients wife was why I left. Now with the employers facing legal action for failing to support staff (the stress caused especially) and modern technology things will hopefully improve, though a camera won’t stop drunk/drugged assaults, nor terror attackers.