Ian joined Informa (formerly UBM) in 2018 as the Editor of SHP. Ian studied journalism at university before spending seven years in online fantasy gaming. Prior to moving to Informa, Ian worked in business to business trade print media, in the automotive sector. He was Online Editor and then moved on to be the Editor of two publications aimed at independent automotive technicians and parts distributors.
October 8, 2019

A man and his niece and nephew have been hurt on a water ride at a Center Parcs resort in Wiltshire, the latest in a series of similar incidents on the ride. 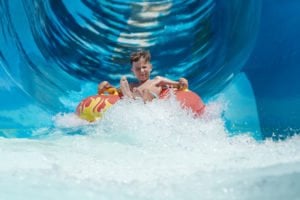 An investigation is under way after three people were hurt on the Tropical Cyclone ride in the ‘Subtropical Swimming Paradise’ at Center Parcs’ site in Longleat.

The man was taken to hospital, while his 12-year-old nephew and 13-year-old niece suffered minor head injuries.

As the rafts approach the bottom of the slide, they are supposed to slow down. On this occasion though, the raft reportedly maintained its speed and travelled too high up the slide of the slide before flipping over.

The injured man told the BBC: “We went into thin air and that’s why we flipped. The thing that I really remember was the cracking sound of my ribs hitting the side of the flume.”

He was taken to hospital by paramedics and reportedly still suffers pain in his ribs and back.

The incident, which happened on 19 August, is not the first of its kind. According to the BBC, which has accessed Center Parcs figures, there have been 23 reports of rafts overturning in the last six months, across the firm’s four sites at Longleat Forest, Elveden Forest, Sherwood Forest and Woburn Forest.

Despite this, Center Parcs said incidents of this nature are ‘extremely rare’. The ride was immediately closed while safety checks were carried out. The internal investigation found that there were no issues with the ride and that the passengers were loaded into the raft correctly.

Center Parcs have also said that it takes guest safety ‘extremely carefully’ and that the ride was fully certified, covered by a risk assessment and control measures were in place to mitigate risks.

Wiltshire Council has also said it will open an investigation into the incident.

Last year, Center Parcs was fined £250,000 for failing to ensure the safety of tree-climbers at its Woburn Forest site in Bedfordshire, in a prosecution brought by Central Bedfordshire Council.

Subscribe to the newsletter ✉️
Center Parcs water safety: Family injured as raft flips over A man and his niece and nephew have been hurt on a water ride at a Center Parcs resort in Wiltshire, the latest in a series of similar incidents on the ride.
Ian Hart
SHP - Health and Safety News, Legislation, PPE, CPD and Resources